Mullet Run - What Is It 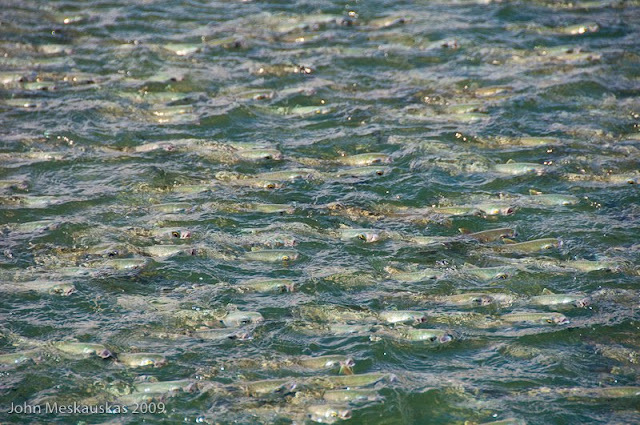 Every fall in Florida as the temperatures begin to cool the fishing gets red hot. The falling temperatures trigger the natural instincts in mullet to head south along the Atlantic coast. The migrating mullet stay in large schools that are irresistible to larger predators, including most game fish.
So what exactly is the Mullet Run?
When water temperatures begin to drop mullet begin to head south to warmer waters where grasses and algae grow during the winter. The fish are almost exclusively herbivorous so the constantly growing food is necessary.
Upon reaching the south point of Florida sexually mature fish head offshore and breed in the Gulf Stream. The fertilized eggs catch a ride north on the current and the cycle starts all over again as the young mullet head in shore.
How does the Mullet Run affect fishing?
The massive amounts of mullet that can be found in the surf and Inter Coastal Waterway during the fall Mullet run send many fish into frenzy. With predators ranging from Snook to Tarpon to Redfish all the way to Kingfish and everything in-between feasting, fishing action can be nearly non-stop.
Anglers that follow the schools of mullet and cast live mullet bait on the out sides of the schools will have success catching the fish following the schools. Putting a bait in the middle of the school has a much lower rate of success than keeping the bait outside the school, because predators will often wait to pick off any fish that swims away from the school!
Now get out there and catch!
courtesy of Daniel Hagan/Floridashorefishing.com
Posted by Tony Rose