The South Florida “butterfly peacock bass” has grown much in popularity over the last decade or so, especially within the last few years. Fishermen from all over the globe book their trips to Miami-Dade & Broward County, saving big money and time on a trip to the Amazon. South Florida peacocks are engulfed by an asphalt jungle, split by hundreds of miles of freshwater canals, contrasted by blonde limestone and surrounded by residential homes, businesses, malls and other urban essentials to life in Florida. Known as the Fishing Capital of the World, Florida is home to a vast array of cichlids, originally found in South America and Africa. The “peacock bass” was introduced in 1984 by the State of Florida to help reduce or control other invasive and nonnative species. The goal was to lower the population or even eradicate various cichlids that had become thick throughout South Florida.
“Peacock bass” are not in the bass family, which are actually in the sunfish family. Peacocks are cichlids, one of 1650 species that have been scientifically described worldwide (2,000 to 3,000 undescribed) and may have gotten their Floridian name for its beautiful colors and patterns, much like the peacock bird. The name “Butterfly” is also not accurate as the Amazon River is home to the real butterfly peacock, iconic for their three black diamond like marks on their sides, instead of the variations of black bars. South Florida is home to three or four types of peacocks. The ocellaris, monoculus, popoca and the monoculus phenotype which I helped confirm with Florida Wildlife Conservation Commission, Jack Vitek from the International Game Fish Association and Dr. Sven Kullander, the world’s leading biologist on cichlidae in 2009. Florida did stock the speckled peacock in 1984 as well, but it did not survive past the first year due to its much longer spawn cycle. Young peacocks are often mistaken for the speckled peacock, often displaying white specks throughout their bodies that will eventually fade as they grow. 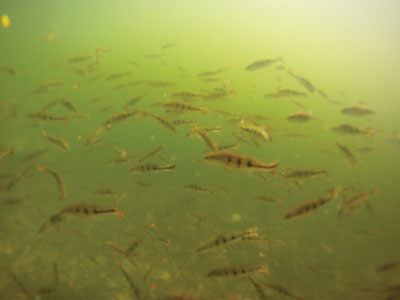 There are several theories of how all these invasive and nonnative species got here in the first place. Some believe the various species escaped fish farms or were illegally introduced and the most plausible reason would be inexperienced aquarium hobbyists, having exotic species imported from around the globe that they released into Florida’s canals and lakes once they outgrew their tanks. The South Florida exotics range from as far south as Homestead to as far north as Palm Beach County. Miami has the largest population and fish bigger in size due to the canals being three to four times deeper than Broward county, allowing these cichlids to seek warmer waters when the air temperatures drop below fifty degrees for too long. The Big Freeze of 2010 where nighttime temperatures dropped into the thirties for extended periods of time caused many species of fish and reptiles to die across Florida. Broward County was hit the hardest with dead peacocks seen floating along banks and canal walls in the thousands.
Since cichlids originate from tropical regions, South Florida is the perfect host. Our climate, combined with an endless buffet of smaller cichlids, breeds of sunfish and baitfish and with few predators to worry about aside from man, has allowed for exotic species to flourish. Spring to late summer is often thought the ideal time to target these cichlids as they tend to spawn, often yielding an easier catch on beds or with fry. I believe the misunderstanding with this concept lies within the name given, associating this breed with that of largemouth bass and the bedding techniques used to catch them. Bass will almost always return to its nest while a cichlid will only do so if the male or female is not overstressed. South Florida’s winters or lack of make this the ideal breeding grounds for the peacocks and they will spawn year round so long as the water temperatures are ideal. This has been the case since 2011, replenishing the casualties from the previous years to present. Great news for fishermen as the state only stocked them once in 1984, in two locations.
Should you like to explore the unique exotic fishery that we have here in South Florida, please take a moment to check out my website or follow me on social media. I’m available to guide you to some of the most exciting fishing that South Florida has to offer.
courtesy of Costal Angler Magazine and
Hai Truong
(786) 405-4146
www.HaiTruongFishing.com
hai@haitruongfishing.com
Posted by Tony Rose