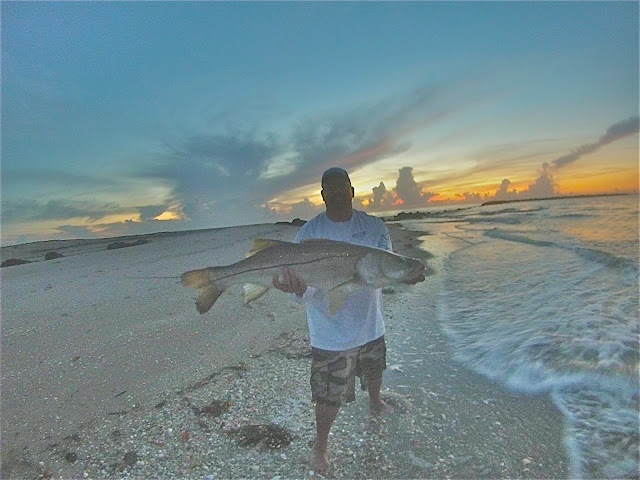 INSHORE
Big snook are moving along the beaches of the Treasure Coast.
They are around all day but the best bite is at high tide. Tarpon are around early in the morning.
You can always find whiting and croaker in the surf, and big jacks – up to 35 pounds – are being caught throughout the day.
In the Indian River, there are big numbers of redfish around docks on the west side early in the morning. Flounder are still hanging around seawalls ad docks on the west side.
Big snook are biting around docks and bridges, and there are tarpon there early in the morning and late in the evening. Mangrove snapper are also holding around bridges and structure. Use shrimp with a jig head.
Anglers are now hooking good numbers of snook and tarpon from the beach in Jupiter, with the best results coming early in the morning and late in the day or evening. Jacks are being caught throughout the day.
The Intracoastal Waterway action has been the same from Jupiter all the way down through central and southern Palm Beach County. It’s snook at night around bridges and dock lights. Some nice-sized snapper are cruising around structure as well, especially near the county’s various inlets.
Snook and tarpon are holding in the Boynton Beach Inlet, and are also being caught in the surf off Boynton Beach. Permit are also in the surf.

FRESHWATER
The early-morning bite is still solid on Lake Okeechobee. It’s definitely hot out there, but if you’re on the water at first light, you can catch good numbers of bass.
Fish the offshore islands, as this is where the best action has been for the past several weeks. You can still catch some nice largemouths back in the grass, but you’re odds of hooking up are much better out in the main lake. Live shiners and artificial lures are all working well, so it’s a matter of preference.


Bass over 5 pounds were reported this week. The bite turns off by 11 a.m., but it does pick up again later in the day (around 8 p.m.).
report courtesy of Palm Beach Post
Posted by Tony Rose