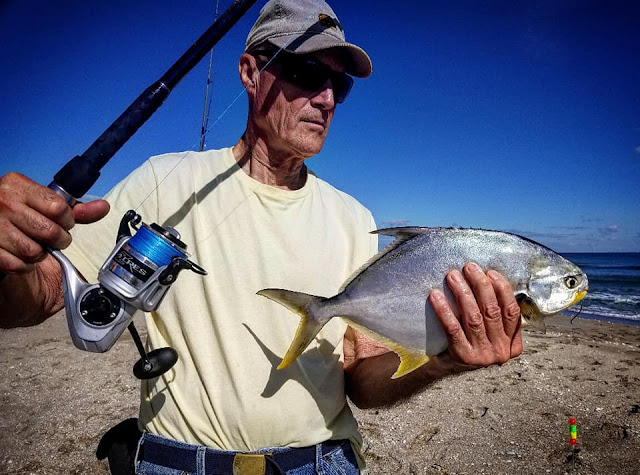 Along the beaches in Jensen Beach, the pompano fishing is still good.
Anglers looking for the tasty fare, however, are dealing with some discolored water from all the recent runoff and the key is finding that seafoam green “pompano water.”
In the Intracoastal Waterway, the name of the game right now is redfish and the place is the Stuart Causeway.
One captain reported catching 12 in one day with several slot-sized fish and some over.
Best baits have been live or dead shrimp.
Just north of Herman’s Bay there has been great action on sheepshead.
Live shrimp are working, but small pieces of dead shrimp on a jig head are working good as well.
Along the beaches in Jupiter the water has cleared up and anglers are catching jack crevalle, bluefish and Spanish mackerel.
They are landing them using spoons, jigs and feathers.
At the Juno Pier there is still a good pompano bite and Doc’s Goofy Jigs the best bet.
The pier also has a good Spanish mackerel bite.
In the Loxahatchee River the tarpon, snook and redfish bite has tapered off quite a bit, but there is still some decent action on jack crevalle.
Along the beaches in Boynton, surf anglers are catching pompano on live sand fleas.
Most attempts using Doc’s Goofy Jigs have resulted in cut lines likely from bluefish or Spanish mackerel.
Bluefish and jack crevalle are being caught using spoons and top water plugs.
The big run of Spanish mackerel should begin soon.
Anglers should watch for schools of glass minnows moving into the area that usually occur just before the run.
Blue runners, jack crevalle, redfish and flounder are being caught at the Boynton Inlet.
For flounder, fish the slack tide along the south jetty and the cleaning tables using live shrimp on a jig head.
The Intracoastal Waterway in the Boynton, like many areas, is being inundated with fresh water from Tropical Storm Phillipe.
Best bets are to fish around the inlet during peak high tide to two hours after when there is still plenty of ocean water.

For bass, live shiners are still working better than artificial.
Hot spots right now include the Horse Island area and the pass.
There are some speckled perch being caught especially near King’s Bar.
For bluegill, the rim canal has been producing a good bite.
report courtesy of Palm Beach Post