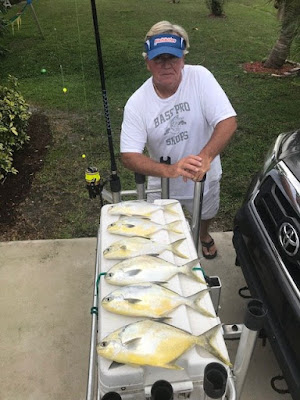 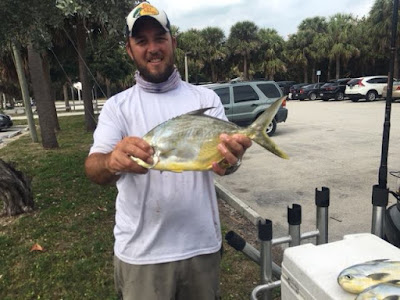 Conditions, Conditions, Conditions. We finally got a day along our local beach front where the conditions that you need to have some great surf action all came together. Clean water, light wave action, and numerous species of fish where spread out over a large portion of our county beaches. I fished with my son Randy at Stuart Beach, as this location had been holding some of the best looking water along South Hutchinson Island. We were lucky enough to catch a big number of pompano (only keeping our limit of course) and added bluefish, ,jacks, whiting, palometa, and blue runners. EZ Flea Fishbites and clam strips were the hot baits for us. There was a nice showing of anglers at Stuart Beach and some of the folks that also had a great day were surf regulars Chuck Frith and Marty Barlow from Jensen Beach who caught pompano, whiting, and croaker. The Port St Lucie Anglers club had a mini-outing for their members and had a nice number of anglers participating this morning. Fishing Director Kurt Hoyer put some nice whiting and croaker in his cooler and caught and released some jacks. Some of the other members added bluefish and jacks to the overall catch. A little further south at Santa Lucea, local regular and friend Ron Robinson, also had a great day with the pompano. Ron reported that other anglers at that beach caught pompano, jacks and bluefish as well. I got a late report from Hobe Sound and the folks that targeted the Pompano in that area today had a great bite going for most of the morning. I also heard from Pat Cooper, who is visiting from western Michigan and attended the Pompano Seminar on Saturday. Pat tried the diamond shaped Fishbite technique and caught a big jack and some bluefish at the Fletcher Beach area.

The best fishing today occured on the rising tide and the high tide mark, which is normally the time to target the pompano at this time of year. The last few weeks the falling tide and even the low tide mark at certain beaches produced a lot of action. All of this information is great news to report, but unfortunately these great conditions are about to end. The National Weather Service Marine Forecast is calling for the winds to shift to the North tomorrow at 10 - 15 knots and increasing to 15 - 20 knots tomorrow night. Looking at Thursday and Friday, the northeast direction returns and builds to 20 - 25 knots. Easterly and southeasterly is the predicted flow at 15 - 20 knots right into Sunday. This is going to give us those challenging conditions that we have been dealing with this fall and winter, and we can only hope as we leave January and head into February that Mother Nature will start to give us more of an opportunity to get back to great fishing. Good luck and catch em up.
Posted by Tony Rose