No huge changes in the inshore report.  Snook fishing remains good, and continuing warmer weather will further heat up the snook bite.   The snook are being caught under boat docks and along seawalls during the day, and around the bridges at night.  Larger swim baits and jigs remain a good lure choice for the snook at night.  Outgoing tide seems to be producing the best number of bites.  Pretty good number of jacks cruising around inshore for those looking for action.  Sheepshead and black drum action has slowed a bit; but the slack is starting to be taken up by increasing numbers of mangrove snapper.  Tarpon have been hanging around Palm Beach Inlet in fair numbers. 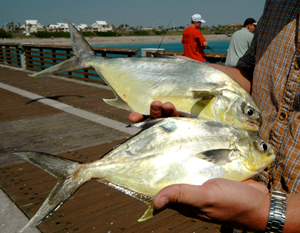 SURF/PIER:  Pompano bite was pretty good again this week.  Sandfleas and clams are the top bait choices for the pompano.  Expect the best pompano bite early in the morning and then again later in the afternoon.  Whiting and some croaker are biting small pieces of shrimp in the first trough.  The bluefish have largely moved up the coast, but a few are still hanging around.  Again lowlight periods will be best for the bluefish.  It's a bit early, but a few snook are starting to show up in the surf.  The Juno Beach Pier is also starting to produce some snook as well.  Dead sardine chunks fished very patiently on the bottom is a good choice for the snook right now.  Still a few spinner/blacktip sharks around as well.  Best bet for the sharks will to be fish lowlight periods of the day or even at night.