Summer has arrived, and you can bet on hot afternoons and lots of great fishing action around the Treasure Coast during June.  The mornings will be calm, and it is certainly to your benefit to get out early to beat the afternoon heat.  Being on the water at first light is worth the effort to watch the sun rise.  Expect a chance of afternoon thunderstorms each day…we can always use some rain around the area this time of year!  Watch the weather each afternoon out there.  It’s a fantastic month to fish.
Inshore will provide lots of redfish, snook and trout action on the flats.  Get those top water lures cleaned up and plan an early morning to get some of that explosive action in the shallows.  Try the DOA Airhead or Bait Buster for great top water action.  Switch to DOA shrimp or a CAL jerk bait as the sun warms up to continue your success.  Watch for bait schools on the flats and you can be assured there are fish nearby.  You can expect the fish to be feeding shallow early and move to the edges of the flats as the sun rises.  Look for sand holes on the flats!  Fish are traditionally lazy and love to sit in a sand hole and wait for the tide to bring the food for them to ambush.
You should be able to find plenty of redfish around the shallows.  The population this year has been outstanding, and they have been growing all spring.  Redfish schools will be feeding on the flats, so be on the lookout for them.  Most will be slot size to just over the slot.  I love using a DOA shrimp or CAL paddle tails while fishing for reds.  Try along the mangroves as well.  Lots of fish will move under the mangroves as the sun heats up for the day.  Trout will be on the grassy flats and feeding on the same food out there.  Move out to three to five feet of water as the day heats up to continue your action.  A Deadly Combo can provide inexperienced anglers with lots of fun learning to fish artificials.    Don’t forget to fish the docks around the river.  Lots of big fish will be hanging around many of the docks along the Indian River.  Live bait, TerrorEyz and DOA shrimp can find some exciting action in June.  Harbor Branch, Queens Cove and Bear Point will all be hot spots for action all summer. 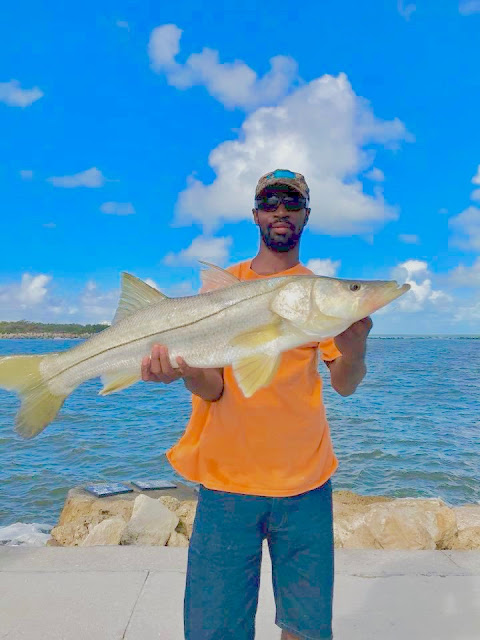 Snook will provide plenty of action around the bridges and jetties this month.  Snook season closed on May 31 and won’t open again until fall.   Night anglers will be heading to the jetties for catch and release snook and maybe some tarpon action.   Top water lures, feather jigs, TerrorEyz and Bait Busters can all get you in on some fantastic action.  Handle the snook carefully and release them quickly and safely so that they will be there this fall.  Jacks will also be hanging around the inlets and give you some rod bending activity.
Make sure you take plenty of water with you.  It will be hot out there.  Drink plenty of fluids to keep yourself hydrated and reduce the risk of heat stroke.  Slather on lots of sunscreen!  Sunburn isn’t a good feeling at the end of the good day of fishing.  A little common sense and a few minutes can a big difference.  Make that part of preparations for your adventures on the water.  It will just make a great day even better!