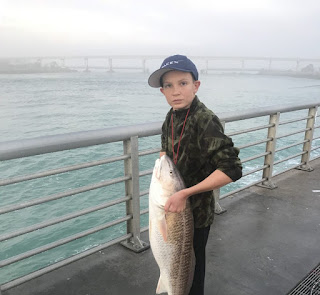 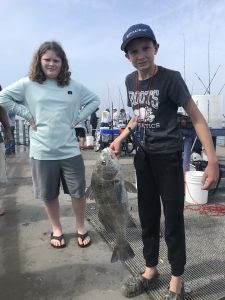 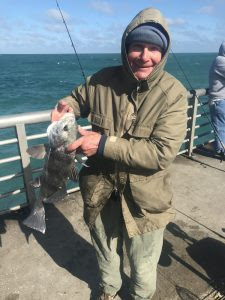 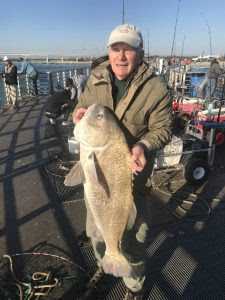 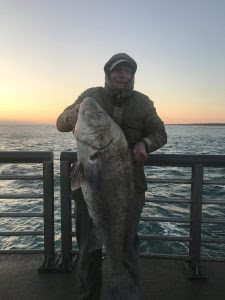 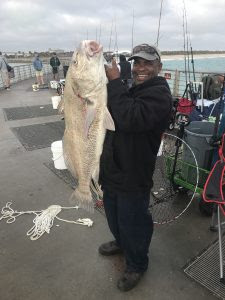 Our friend Tommy Turowski at Sebastian Inlet Bait & Tackles has been seeing a whole lot of Spanish Mackerel and Bluefish, off both the North and South Jetty.  Got-cha lures and silver spoons haven been working great.  Anglers have been reeling in some Jacks, Redfish, Black Drum and Snook off the North Jetty and throughout the inlet.  Biting mostly on live or frozen shrimp and cut bait.  The Sheepshead bite has been great and we know winter when the  is cold is a great  them.  Pompano, Whiting and Bluefish are being caught off the beach.  Two hook bottom rigs are bringing those fish in for our shore anglers.  Bluefish are hitting silver spoons off the beach.  From all the reports we have been getting, fishing has been consistently great in the last few weeks!
Today we’re sending out a special thanks to Jim Stafford and his friend Garryn from Cocoa Beach, our featured angler of the week.  Garryn is quite the upcoming fisherman and has been named “King of the Jetty” by his fellow anglers.  Everyone who knows him says he’s on his way to becoming a legend at the inlet!  Jim tells us that he met Garryn and his family on the North Jetty and that Garryn has been giving him fishing tips.  We’ve included a couple more pictures here; Gordon Robinson of New York and Ike with his 60 lb. Black Drum, all caught off the North Jetty.
Another  from our friend Ed Killer at Treasure Coast Newspapers..  NOAA Fisheries has decided to open a season for Red Snapper this year for five days this summer.  July 12, 13, 14, 19 and 20 are the dates recreational anglers will be able to harvest one Red Snapper per person, per day.
Posted by Tony Rose