INSHORE FISHING
The bridges in the Jensen Beach area have been great for snook in the early mornings the past few days. Throwing lures that resemble mullet has been extremely effective.
Around the power plant, there has been good action for trout and some redfish.

The trout are hitting live shrimp or D.O.A. shrimp on a popping cork.
Red fish are also hitting live shrimp or D.O.A. shrimp on a popping cork as well as dead bait.
In the Jupiter Inlet, there have been large schools of mullet moving through the inlet and the water along the beaches has begun to clean up.
Fishing at the Boynton Inlet the last few days has been off the hook!
They are getting mutton snapper up to eight pounds on live finger mullet and cut mullet.
They are also catching slot-size redfish.
There have been huge schools of snook with some fish in the 30-pound range.
Inside the inlet, on the south side, there have been some nice cubera snapper. One diver got a 33 pounder while spearfishing.
Working the beaches from Lake Worth down to Gulfstream Park, surf anglers are also getting in on the fantastic action.
Using big surf rods and locating the breaks in the sandbars, they are catching bluefish, snook, jack crevalle, pompano and permit.
Pompano and permit are being taken using small crabs and sand fleas. 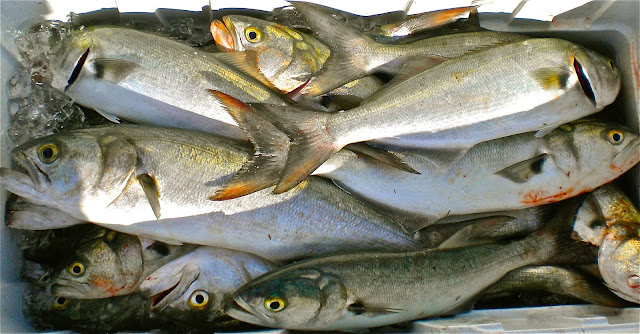 The bluefish, snook and jack crevalle are being caught on mullet chunks, live finger mullet, chicken feather jigs and plugs that resemble finger mullet.
The best times have been slack high tide to three hours after.
Along the flats around Beer Can Island and Manalapan, there has been good action on snook. Working the channel edges and docks they are being caught on live mullet and X-Rap lures.

In that same area, the docks on the west side also have a decent bite on jack crevalle and redfish.
The Lantana Bridge is also a hot spot right now. Anglers are getting mutton snapper up to 27 inches on mullet chunks, live mullet and live shrimp.
They are also catching snook, redfish and a few black drum. The black drum are being caught on live crabs.
LAKE OKEECHOBEE
Though on Wednesday morning, one charter captain mentioned the fish were a bit finicky, he said the early morning has still been good. Using swim jigs and spinner baits and working the outside grasslines has been producing the best results. Once the morning bite starts to back off switch to a flippin’ stick.
J&S Canal, Tin House Cove and Indian Prairie have been hot spots the past week.
report courtesy of Palm Beach Post