Looking for bonefish? The Sailfish Flats area (between Sewell's Point and Sailfish Point) has been good lately using shrimp on a jighead. 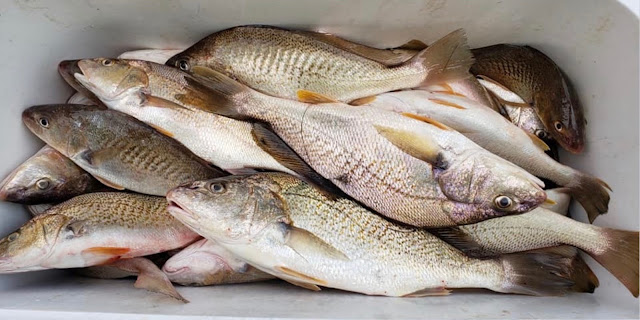 Working shrimp on a jighead from the "ten cent" or Evans Crary Bridge and Roosevelt Bridge has been producing some quality-size croaker the past week.

Most of the bridges along, and channel markers in, the St. Lucie and Indian Rivers have been holding black drum, tripletail and flounder. Shrimp on a jighead is working well for them too.

Looking for seatrout? Just north of Fort Pierce, anglers working the east side of the Intracoastal Waterway, during high tide, along the mangroves are having good luck using Gulp! shrimp as well as shrimp on a popping cork.

In the Lake Worth Inlet, anglers are still reporting a good snook bite.

Also in the Lake Worth Inlet and around the Blue Heron Bridge the mutton snapper bite remains sold.

Live shrimp and flarehawk jigs have been the top picks for both the past week.

From the Jupiter Inlet down to the Juno Pier, surf anglers are having a blast catching bluefish, Spanish mackerel and jack crevalle. They are being caught on spoons. The bite was so good on Wednesday several anglers said they were getting hits on every cast.

In the Loxahatchee River, there is still a decent snook bite. Working the bridges and dock lights at night and using shrimp on a jighead has been effective.

Along the beaches from the Lake Worth Pier down to the Boynton Inlet there has been good action for pompano and Spanish mackerel.

Though sandfleas are best, goofy jigs are also working for the pompano.

For the Spanish mackerel, cast a Krocodile spoon out as far as you can and reel it in fast.

In the ICW from Ocean Avenue in Boynton beach all the way up to the Lake Worth bridge there have been redfish around the docks on the west side. Jigs, gold spoons and top water lures are working. Gold colors have been tops.

In the same areas, around the bridge pilings there have been lots of sheepshead. Try Chasebait fiddler crabs or live shrimp.

There is still a good spec bite on jigs in front of the pier, around Buckhead Ridge and down towards Nubbin Slough.

The bass bite has been fantastic on shiners. If going with an artificial, though, speed worms have been good. With the high water level, the bite has been good a bit further back into the grass. Hot spots have been Tin House Cove and King's Bar.