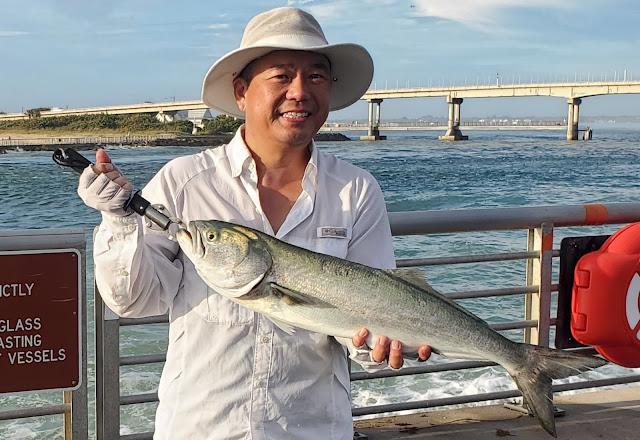 Cooler water bring in frisky fish, the best time of year to fish the inlet

Our Angler of the Week! Augustine Chan writes: "i was casting a Rapala X-Rap XR10 (8 lb. Fireline, Daiwa 2500 reel, 7'6" medium light rod) on the ocean side of the North jetty for jacks and mackerel when the big bluefish struck my lure. I fought the fish for a few very exciting minutes when I finally brought it up (with the help of a landing net courtesy of friendly regulars. It's nice to know there are always friendly regulars around to help me with unexpectedly large catches). It weighed 8 lbs. on my grip.

And now for the fishing report, courtesy of Wayne "Snookman" Landry:

Good morning, fishing friends and family! I hope you all had a great weekend and got out to fish as the weather was fantastic. The inlet was abuzz with fishing action last week. It didn't really matter where you fished because fish were caught just about everywhere in the inlet. Most of the action though was at the north and south jetties, with several species being caught. The water has cooled down and cleaned up pretty nicely and has made the fish frisky. Greenies and mullet have attracted and kept the predators interested, as it is the best time of the year, fall, for great fishing at the inlet.

North Jetty: Snook fishing most of last week was excellent, with the majority of the fish caught on the high tide on live shrimp.  Many slot-sized fish were caught, along with shorts and oversized specimens as well. Keepers were averaging 29 to 32 inches, and plenty were taken home. That bite lasted from Monday thru Friday and slowed dramatically Saturday and Sunday, with Sunday being a croaker-only day; that's all they wanted, and not very many were landed.  All last week boaters hammered the snook with live pigfish and croakers and pinfish. I saw nice black drum, sheepshead and even nice pompano landed. The drum and sheepshead were caught on dead fresh shrimp, and the pomps on the small yellow ‘goofy jigs’. Drum were averaging 15 to 24 inches, the sheepshead one to two pounds, and the pompano 15 inches or so inches. At the beginning of the week, Spanish mackerel were hitting small jigs, silver spoons and greenies. Quite a few fish were caught with some folks getting their limits. The average size of the Spanish was about 16 to 18 inches, with a few I saw pushing the three to four-pound range. The inlet also had the ‘men in grey suits,’ aka the SHARKS! Large bull sharks have been looking for a quick meal. I saw a few boaters have their snook bit in half, and a few anglers  hooked sharks on the jetty while fishing live jacks on the incoming tide. A few snook were also eaten on the jetty as well by the sharks. These majestic animals were in the six to seven-foot range.

South Jetty: Fishing here was on fire Friday thru Sunday for the snook on the incoming tide! Lots of fish being caught on just about everything  live that you tossed at them. Live croakers seemed to be the better bait. The fish were all along the jetty and rock shoreline from the tip to all the way west of the catwalk. Lots of smaller fish are over here, but also there were plenty of ‘slots’ taken. There were the big girls present as well to make it interesting. Some redfish were caught as well in the mix, but remember, they are catch-and-release only during this time of year. Large jack crevalles and Spanish were in the mix on the outgoing tide at the tip on spoons, jigs and live baits. I also heard of some nice flounder caught, and kept (which was a no-no, as the season for them is closed until December 1). You can catch them; just releasee them.  I heard of spotted seatrout caught, but as of Nov. 1 they too are closed for harvest, and don't open ack up until Jan. 1.

Catwalks, both sides: The North side is still closed. The South side has provided a decent sheepshead, both tides with the incoming being the better tide to fish. The water is higher and cleaner. Sheepshead are biting live fiddler crabs - their favorite food. They will bite small pieces of dead shrimp too, but prefer the fiddlers. The snook bite at night has been rather good for the jig anglers, but has slowed a bit. Please remember that the fenders are off-limits anytime. There are ‘no trespassing’ signs posted to warn you it is prohibited. We’ve received complaints of people going out there at night, so be aware. If you are caught trespassing, you will be cited.

Surf, both sides The north side surf has been slow due to NNE winds, low tides and low water on the beach to fish. The South side has been much better as the south jetty partially  blocks the wind and waves coming on shore, and there is a deeper trough over there. With the water cleaned up a bit and cooled down, I had reports of some pompano being caught along with whiting and a bunch of croakers in the area, which can be used for snook bait right where you catch them.

T-Dock: The fishing here has been fairly good for the sheepshead. There are some nice fish being caught around the dock pilings on live fiddler crabs. Most of the fish are around 12 to 14 inches. Either tide is good with the incoming being better. Spanish mackerel are being caught on small white jigs and smaller silver spoons. The snook bite has been fairly good as well. Plenty of fish being caught from the dock, boats and the shoreline on live pigs, pins and croakers with the incoming tide being the best for them.

So, there is the ‘beef,’ my friends! Supposed to be a really nice week weatherwise except for a big swell making the surf kind of messy. Get out there and do some fishing or some lounging on the beach and enjoy the oceanside outdoors! Cheers. Snookman