INSHORE:  Snook fishing remains the main game in town on the inshore side of things.  The bridges have been pretty good as of late, especially at night on the outgoing tide.  Flair hawk jigs and big swim baits remain the top lure choices for the snook.  The spillways are also producing a good number of snook and a few tarpon.  A few mangrove snapper are being caught around the bridges as well.  Best snapper bite seems to be on live shrimp and pilchards; mainly at night as well. 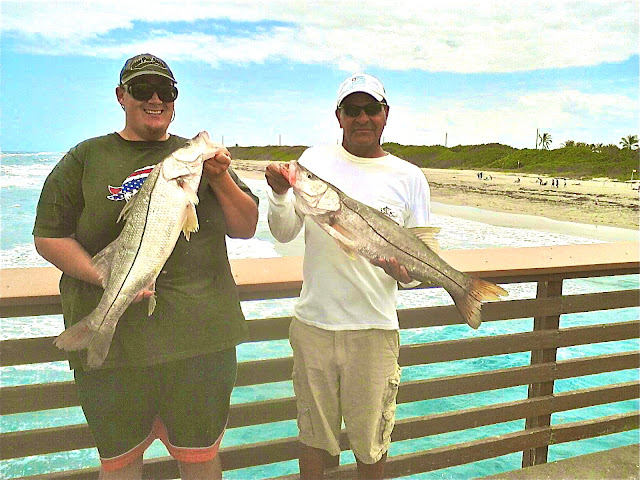 SURF/PIER: Catch and release snook fishing remains very good at the Juno Beach Pier, along the beach, and in Palm Beach and Jupiter Inlets.  Live sandperch and croakers will be the best live bait choices; especially for those looking for a big end of summer snook.  Looks like the wind is going to blow just a little; if the forecast is right it could lead to some really good lure fishing for the snook.  A little chop and some color in the water will have the snook ready to bite flair hawk style jigs, swimsuits, and swimming plugs.  Lowlight conditions will be best for fooling the snook on the lures.  The upcoming full moon could really fire them up at night as well.  The Juno Beach Pier has had some bonita cruising around as well as a handful of kingfish.  A Rapala X-Rap is a good lure choice for the kings and bonitas.  Like the snook; best action on the kings will be early morning and late afternoon.  Other surf action remains a bit spotty.  Scattered schools of spanish mackerel around.
Posted by Tony Rose