INSHORE:  Snook season opened Friday...pretty much that all needs to be written!  Snook fishing remains the best bet inshore right now.  The bridges are holding fish at night, as are certain docks and seawalls in the Loxahatchee River and ICW.  Look for the snook to be keyed in on bigger baits.  The mullet aren't far away and the snook know it. 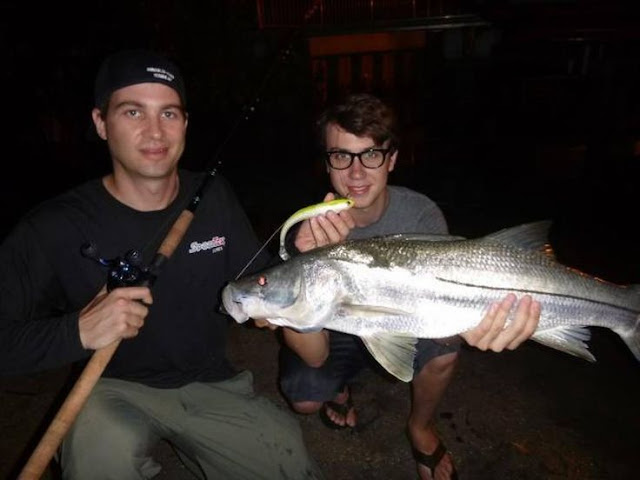 Big baits like SpoolTek Swimbaits, Flair Hawk Jigs, and big swimming plugs are great bait choices to try and invite a slot size snook home for dinner.  Look for the outgoing tide to produce best for the snook.  Some big jacks also mixed in with the snook; as are a few tarpon.  Other inshore action is a bit slow.  It's all about the mullet showing up now; and when they do...GAME ON!

SURF/PIER:  Lots of good stuff going on at the Pier and along the beach right now.  The big draw this weekend will no doubt be the snook; and for the most part they have not disappointed lately.  A ground swell could slightly alter that this weekend; but hopefully it only helps fire them up a little more.  Lots of bait along the beach (mostly pilchards with some mullet mixed in) attracting lots of other stuff as well.  Fair number of spanish mackerel, jacks, and blue runners hanging around right now.  The bobber rig and a small clark spoon is a great rig to throw on the beach right now for good mixed bag action.  Lots of blacktop sharks hanging around as well.  Should be pretty fishy at the beach and pier this weekend...well worth going if you have a chance!
Posted by Tony Rose