INSHORE:  Catch and release snook fishing will remain the main game in town right now.  Best snook bite will be at night, but a few can be caught during the day as well.  Look for the biggest fish to be staged up somewhere close to or in an inlet right now.  Big swimbaits and flair hawk jigs remain a solid lure choice right now, especially if your looking to catcha big snook.  The ICW has been holding a few big jacks along seawalls early in the morning.  A large noisy topwater or big live mullet is the best choice for the big jacks right now.  Look for the jacks to be most active early in the morning and late in the afternoon.  Mangrove snapper action is picking up around area bridges.  Some good reports of some big sandperch in the ICW on small pieces of cut shrimp. 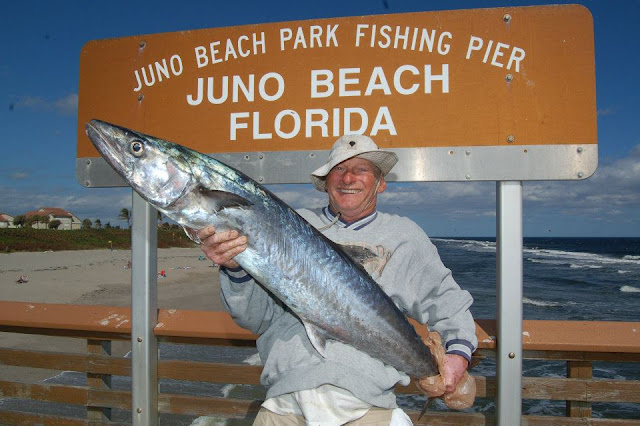 SURF/PIER:  The Juno Beach Pier has been pretty hot this week.  A fair number of kingfish have been around first thing in the morning and then again late in the afternoon.  A live bait on a trolley rig or Rapala X-Rap is the best choice for the kingfish.  Lowlight periods of the day (morning, late afternoon, or heavy clouds/stormy) are the biggest key for getting a kingfish bite.  MIxed in with the kingfish have been a few bonita, some big jacks, and a few tarpon.  The snook bite continues to improve on a daily basis .  Live baits(threadfins, pilchards, sardines, croakers) have been good for the snook, as have dead sardines and bonita chunks.  The Spanish Mackerel have been around the pier in fair numbers as well.  White crappie jigs, small Rapala X-Raps, and free-lined small live baits are the best choice for the Spanish Mackerel.  Croakers and sandperch are in the first trough and biting small pieces of shrimp.  It's pretty late for the pompano, but a few are still being caught as well.  Sandfleas and clams remain the bait of choice for the last straggler pomps hanging around.  Snook should also start to move along the beach in pretty fair numbers now on the backside of the moon.  Swimming plugs will be a good choice for snook along the beach during lowlight periods of the day, while a small white bucktail jig or small paddletail will be a better choice once the sun gets up a bit.