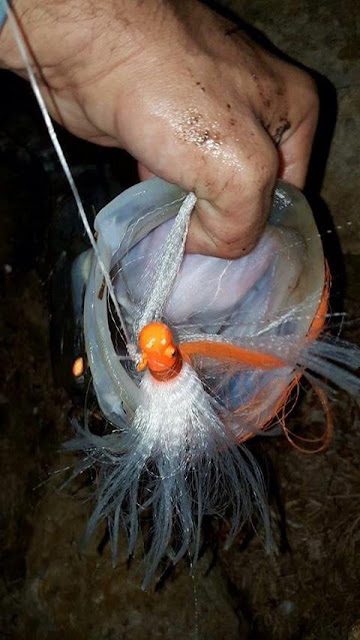 If you're hoping for some late-season snook, a trip up to Sebastian Inlet is not a bad call. The cold front has brought fish in from the ocean and there are plenty of slot-size being caught. Flarehawk jigs are working best. Snook season closes Dec. 15.

There has been a really good pompano bite on the Sailfish Flats in Stuart and on the beaches in Martin County this week. Though not massive numbers there have been plenty of nice-size fish caught. They are mostly being taken on white crab- and sandflea-flavored Fishbites.

Also on the beaches in Martin and St. Lucie County there has been some good action for bluefish and Spanish mackerel. Walk the beach and throw spoons or flash minnows.

The bridges spanning the St. Lucie and Indian Rivers around Jensen and Stuart have had good bites for black drum, sheepshead and tripletail this week. Use shrimp on a jighead or shrimp fished on the bottom. For the black drum the last half of the outgoing tide has been best.

Anglers fishing the Lantana Bridge have been catching sheepshead, black drum, jack crevalle, ladyfish and a few snook at night.

Shrimp, crab and clams have been working well for the sheepshead and black drum.

For the snook, an angler using Bomber Wind-Cheaters managed to get three slot-size fish in three days, plus several under- and over-slot fish.

Though the cold weather has slowed things down, the spec bite was fantastic last weekend and should pick right back up. The cooler weather should also start bringing them in and getting them more congregated along the shore. The King's Bar, Buckhead Ridge and Third Point areas have been good using white, chartreuse and blue jigs. Jigs have been better than minnows, but that should start to even out after this cool snap.

The bass bite has also slowed down with the cooler weather, but, like the specs, should pick back up in a day or so. Shiners are definitely working better than artificials right now. If you're going to use an artificial though, work them a little slower and try flippin' and crankbaits in the Kissimmee River and rim canals.