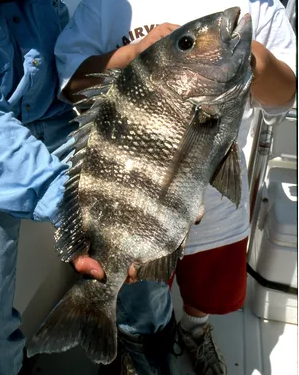 Though there are black drum and sheepshead still being caught in the St. Lucie and Indian Rivers the bite has been much slower with the prolonged cool weather.

At the Roosevelt and 10-cent brigde, however, the croaker bite has been fantastic. There are plenty of keepers and some big ones making anglers think they've got a redfish on the line.

Working just outside the St. Lucie Inlet, on the hard bottom in 10 to 20 feet of water, there has been good action for Spanish mackerel, jack crevalle and some big sheepshead. Shrimp on a jig head will work for all three.

Anglers in the Loxahatchee River are catching a few ladyfish and jack crevalle.

The sheepshead bite at the Boynton Inlet has been excellent around the seawalls and on the north jetty. Fish up to 10 pounds are being caught on clams, blanched sandfleas and Chasebait fiddler crabs.

The action in the Intracoastal Waterway around Boynton has been slow with a few redfish, jack crevalle and snook hitting gold flake Grub Tails jigged around the docks and Snook Island area.

At the Lantana Bridge there has been some action on sheepshead and black drum. Live shrimp fished on the bottom around the northwest fender has been working.

The bass fishing has been extremely slow the past week. Live shiners are barely working and you can pretty much forget about going with anything artificial.

The spec bite has been decent. If you're heading out on the lake jigs, especially ones that are white with a whtie tail or green with white tail, are working best. If you're fishing in the river minnows are the way to go.

Though there are a few anglers getting their limits, it's not happening every minute of every day.

In Lake Osbourne and the area canals, the bite for both largemouth and sunshine bass has been good. Live shiners and topwater poppers in the early morning have been producing largemouth bass up to five pounds. Live shad, minnows and grass shrimp fished on a 1/8-ounce jig head under a bobber has been effective in catching sunshine bass up to four pounds.