Along the beaches north and south of the Lake Worth Inlet, there are large numbers of spinner sharks all over the beach . Though they are best targeted with chunks of bait at night, there are surf anglers picking them up in low light hours at dusk and dawn using large popping lures.

There have been some massive schools of jack crevalle chasing bait just off Singer Island. They are just out of reach of the surf anglers, but captains can drive up to the schools and have a blast.

Working the sea walls from the Southern Boulevard bridge up to the power plant in Riviera Beach has been producing excellent catch-and-release action for jack crevalle and the occasional tarpon. Live goggle eyes are working best.

As the weather has stayed warm, the bass bite has continued to pick up. Capt. Larry Wright had one group into 14 fish during a half day charter on Tuesday with the biggest weighing in at a respectable 7 pounds, 14 ounces. Live shiners worked inside the grassline are working best. If going with an artificial though, chatter baits followed by top water lures and then flippin' creature style baits has been the way to go. The Indian Prairie area has been good

The spec bite is still fantastic! Using minnows and fishing in the river, Capt. Larry Wright had his clients into 24 fish by 9:20 on Wednesday morning. 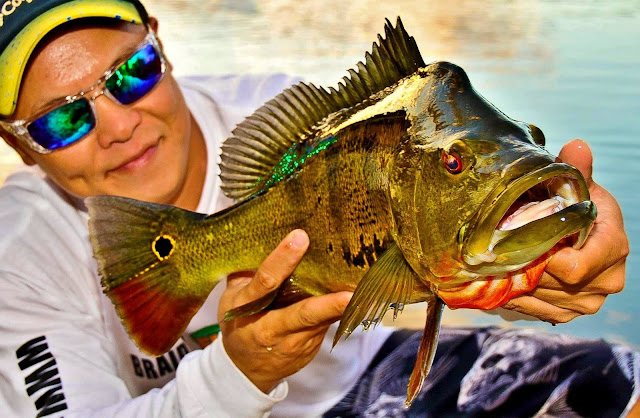 The recent combination of warm weather, rain and a few overcast days has had the snakeheads, peacock bass and largemouth bass fired up in the canals around west Delray Beach and Boca Raton. Top water frog-style baits in white, black or green/brown have been working well. Look for overhanging branches or thick cover along the banks for best results