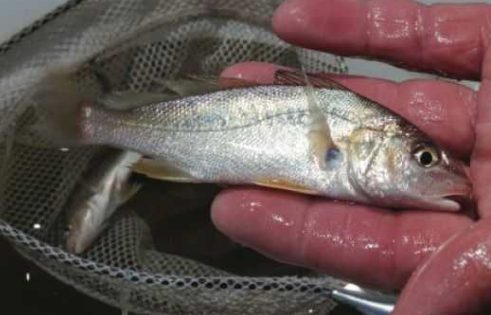 At the St. Lucie Inlet, the snook action is still excellent. Live croakers fished during the incoming or outgoing (not slack) tide has been best.

The Snook Nook was supposed to get a shipment of croakers in today, but call to check.

There have also been tarpon at the inlet, as well as at the Crossroads and the causeways. Anglers fishing the causeways are doing best using crabs during the outgoing tide. Live mullet and pilchards will also work.

Structure, including dock pilings and rocks, along the St. Lucie River have been holding mangrove snapper. Small pilchards have been working best.

Along the beaches in St. Lucie and Martin Counties, the first trough still has plenty of whiting and croaker. Pieces of shrimp or bloodworm-flavored Fishbites are working.

There are also snook cruising the beaches.

The snook action is still fantastic at the Boynton Inlet. Anglers are having a blast catching them from both the north and south jetties. During the day, fishing live pinfish and small grunts around the pilings of the north jetty has been producing nice slot-sized fish. At night, throwing two- to three-ounce red tail flair hawk jigs or White Chicken feathers during the outgoing tide from the south jetty has been producing good action.

The Lantana Bridge continues to hold good numbers of small herring and greenies for bait.

Also at the bridge, there has been a good night time bite for snook, tarpon and mangrove snapper using live bait while working the shadow lines or throwing small, silver-colored X-Rap lures.

Want more snook action? Head over to the Boynton Spillway and use live bait including threadfin herring, pinfish, shad or small cichlids.

Using only artificial baits and no shiners, Capt. Larry Wright said the bass fishing has been a little slow the past few days.

With the higher water, they were working deeper in the grass and were having the most success throwing white chatter baits. Skinny Dippers in white were also producing some action as were top water lures including Heddon's Zara spooks and Tiny Torpedoes. The light colors are offering a flash in the water that the bass are seeing and honing in on.

The bite is still best from dawn until around 8:30 a.m. After that switching to a flippin' stick is the best bet.