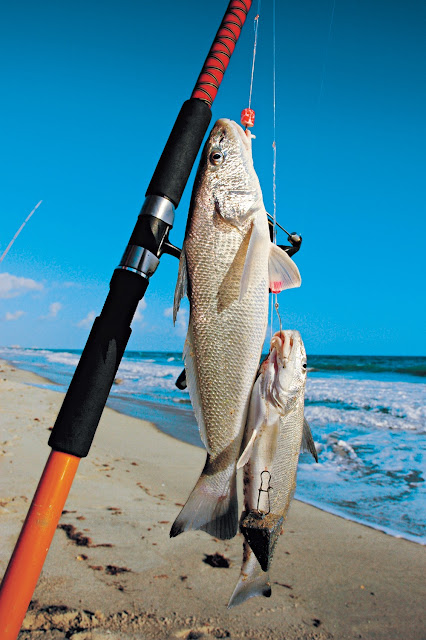 There are a lot of whiting in the surf along Jensen Beach, and there are some nice pompano around. The fish are around throughout the day, but the best bite seems to be during the higher tides.
In the Indian River, the east side has been producing the best action (thanks to the wind). The trout bite has been excellent on the east side, while nice flounder and big snapper are being caught around the mangroves and rock edges.
Whiting, bluefish and Spanish mackerel are all biting along the beaches of Jupiter. Anglers seem to be having success all morning, day and night.
Snook are still being caught around the bridges of the Intracoastal Waterway in and around Jupiter. The best bite is still at night, but there are plenty being caught during the day as well. Bluefish have also been chewing this week.
Jacks are being caught in the surf from Palm Beach south to Boca Raton. They are also being reported at the county’s various inlets.
Those fishing the bridges of the Intracoastal throughout central and southern Palm Beach County (especially at night) are reporting snook, mangrove snapper, ladyfish, sheepshead, black drum, and the occasional ladyfish.

FRESHWATER
The bass bite is really picking up on Lake Okeechobee. This promises to be a good season on the “Big O,” and despite strong winds, good numbers of bass are being reported, including several large fish. It hasn’t been uncommon to hear about 6-pounders being reeled in during the past few weeks.
The best action is still along the outside edges and back in the grass, although the wind has made it challenging to hold those spots at times. The key is finding clean water. That can be tricky when the wind is blowing, but it doesn’t take long once the winds lie down for the water to clear up again. East Wall, West Wall and Ritta Island have been hot spots recently.
Anglers are having success with both artificial lures and large shiners, but shiners still get the nod at this time.
courtesy of The Palm Beach Post