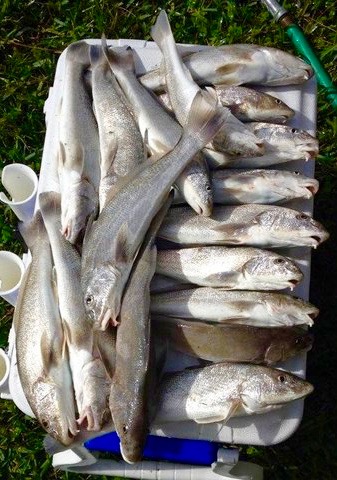 There are plenty of bluefish and whiting in the surf along Jensen Beach, and some pompano and Spanish mackerel have also been hooked.
In the Indian River, big jacks and pompano are chewing around the powerplant and near the Stuart Causeway. Snook and snapper are biting at the bridges as well.
Those targeting redfish are catching them on the west side of the river from County Line Road and to the north. Trout are on the east side from Nettles Island and north.
Schools of big jacks (up to 30 pounds) are running the beaches of Jupiter. There are also pompano around, and the bite is best on the higher tide. Smaller snook are also starting to show up along the beach and around the jetty at the Jupiter Inlet.
Kingfish and small snapper are biting in the Intracoastal Waterway from Marker 50 to Marker 42, and snook can always be found around the beaches and docks, especially at night.
Jacks, ladyfish, snook and snapper have all been reported in the Intracoastal in the Palm Beach area and throughout the central and southern parts of the county.
Jacks, mangrove snapper and snook are all being reeled in near the north jetty at the Boynton Beach Inlet. Permit fishing has also picked up at night. Throw live crab or whole squid.
Big jacks, sheepshead and, of course, snook are all being caught around the bridges of the Intracoastal in and around Boynton Beach.

LAKE OKEECHOBEE
It has been another solid week of bass fishing on Lake Okeechobee. The numbers are down a bit from recent weeks and months, but plenty of fish are being caught. The outside edges and back in the grass is still the place to be, and East Wall and West Wall have been some hot spots for those fishing the southern area of the lake.
Live shiners are still outperforming artificial lures, and the best time of day to be on the water is early morning…think first light.
report courtesy of Palm Beach Post