October marks the transition into the fall weather patterns along the Treasure Coast. You can expect temperatures to begin to cool down somewhat into more comfortable days to enjoy the outdoors. Water temperatures will begin to slowly cool off as well. This year has brought us lots of rain and a quiet hurricane season so far. October provides great weather and hungry fish. It's a fantastic month to be
fishing!

The fall mullet run will continue to dominate the area as large schools of finger mullet fill the beaches, inlets and rivers of the area. It has been an active season this year. You can expect lots of big fish to be feeding on them both day and night. Snook fishing will be best during the night hours on the higher ends of the tides. Live finger mullet, croakers and pigfish will be the best live baits to use. DOA Terror Eyz, Bait Busters and feather jigs will be good artificial lures to use for snook. Try around the jetties, turning basin and bridges as well as many of the deeper docks around the river. Lighted docks are especially productive when fishing at night. 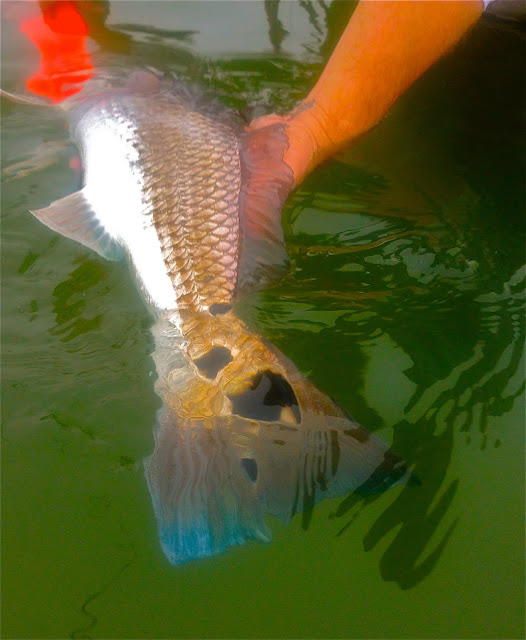 Redfish has continued to be a wonderful fishery for us again this year. Each year has seen their population increase and many anglers have enjoyed the experience of fishing a large school of reds this year. October will continue to be a productive month for those who seek redfish on the flats. The new DOA 2 3/4“ shrimp or CAL grub tails are two of the best choices for redfish along with a variety of live and cut baits. The west shoreline south of Fort Pierce is always a good area when looking for redfish.

The trout bite will be good this month. Get out early with a top water lure for some exciting action on the river. Switch to a DOA shrimp or CAL jerk bait later in the mornings. Harbor Branch, Queen's Cove and Middle Cove are all great areas to fish for trout around the Treasure Coast. Look for some sheepshead, black drum and snapper around the bridges, docks and channel edges. The surf will be alive with jacks, snook, bluefish and other predators, which will all be chasing the bait schools along the beach.

Snook season has been in full swing for the past month and anglers are always looking for that slot fish to take home. Beaches, jetties, bridges and mangroves are all popular areas to seek snook. Top water lures, DOA Bait Busters, CAL Airheads and live baits are all great ways to target snook in October. Have fun this month!
It's another great month to fish along the Treasure Coast!
Posted by Tony Rose