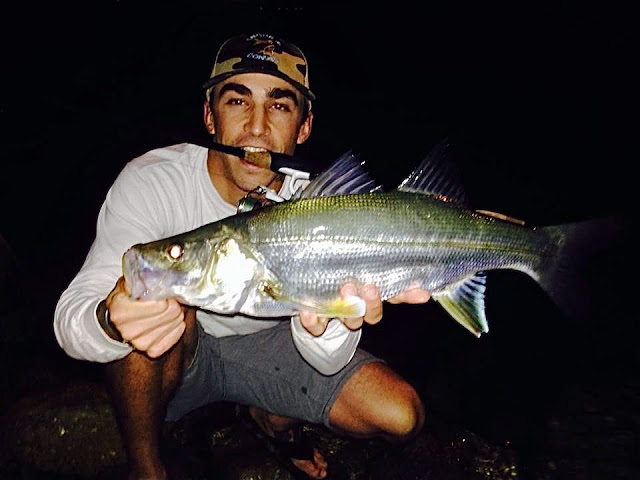 INSHORE:  Snook fishing remains the main game in town.  The bridges are producing a good number of snook at night, especially on the outgoing tide.  The flair hawk bite is starting to pick up, as is the swimbait bite.  The snook are still eating shrimp, but with the arrival of some springtime mullet the bigger baits are coming into play for sure.  The jacks are still cruising ICW seawalls and docks, but the bigger ones have been a little harder to find.  The Munyon Island flats have been a bit slow.  Home Sound Flats are holding some bait and a little mixed bag of snook, ladyfish, and jacks.

SURF/PIER:  Pompano are still biting pretty good, but surf conditions have made fishing tough.  The seaweed has been thick and troublesome.  Hopefully it will work its way out of the way before long.  Sandfleas and clams remain the baits of choice for the pompano.  Look for the early morning or late afternoon to produce best on the pomps.  Still a stray bluefish or two around, but for the most part they have moved on.  Snook action has been hot at the Juno Beach Pier.  Frozen sardines have been the bait of choice for the snook.  The kingfish have also been around at the pier.  Live baits (threadfin or small blue runner) and Rapala X-Raps have been the baits of choice for the kingfish.  Best action on the kings has been late afternoon.
Posted by Tony Rose