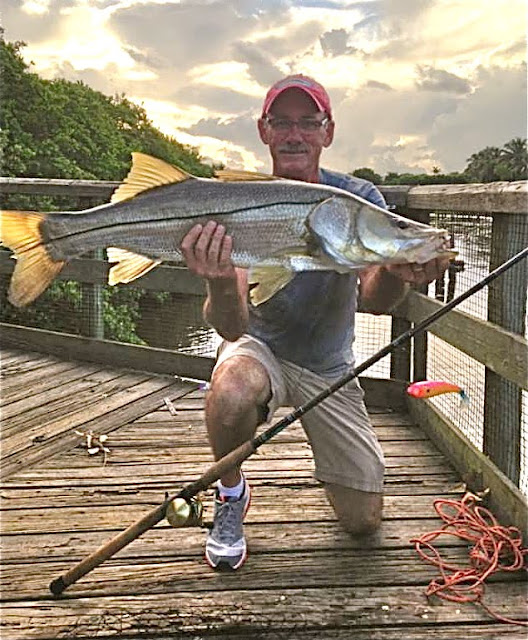 INSHORE:  Catch and release snook fishing remains red hot right now.  Look for the spillways to be good after heavy rains; while the bridges have been producing good at night on the outgoing tide.  SpoolTek and flair hawk jigs have been a good choice for the snook.  Live shrimp and small live pilchards are a good bait choice for the snapper right now inshore.  Other action inshore has been kind of slow due to the hot weather.  Mangrove snapper have been biting around the bridges at night.

SURF/PIER:  The catch and release snook fishing is absolutely on fire right now.  Good numbers of snook in the Palm Beach and Jupiter Inlet, along the beach, and at the Juno Beach Fishing Pier right now.  Best action on the snook will be first thing in the morning and late in the afternoon.  Live croakers and sand perch will be the best live bait choice; while big swimbaits and soft plastics seem to be getting the nod on the artificial side of things.  A fair number of the tarpon are still around.  Most of the tarpon can be found pushing north along the beach; especially early in the morning.  Good action on small Cero and Spanish mackerel at the Juno Beach Pier right now.  The mackerel seem to be responding best to flatlined small live baits right now.  A few mangrove snapper are being caught around the Juno Beach Pier and Jupiter Inlet jetty early in the morning.
Posted by Tony Rose