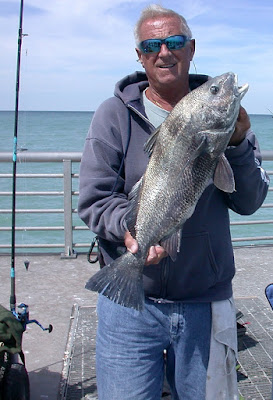 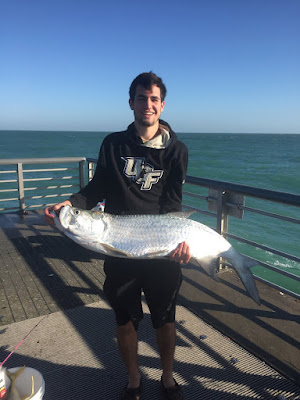 THE SEBASTIAN INLET STATE PARK HAS BEEN CLOSING THE NORTH JETTY PERIODICALLY FOR PUBLIC SAFETY PURPOSES.  PLEASE CALL 321-984-4852 FOR INFORMATION ON CLOSURES.
We have overcast skies at the inlet this morning.  Winds are blowing out of the West-Southwest at 9 mph and gusting to 13.  Winds and seas will increase this afternoon ahead of a strong cold front.  NOAA has multiple advisories in effect.  A small craft advisory is in effect from 10:00 a.m. through this afternoon.  A gale warning is effect from this afternoon through late tonight.  Conditions are going to get rough and the Sebastian Inlet State Park may decide to close the north jetty to fishing, call ahead.
Over the weekend we had a fair bite according to Tommy Turowski at the Sebastian Inlet Bait and Tackle Shop.  A variety of species were landed but many in low numbers.  Snook, Reds, Black Drum, Sheepshead, Blues, a Pompano or two, Spanish Mackerel and Jacks all made appearances at the north jetty.
Our first angler of the day is Vero Beach’s Mike Ricciardi with the 28” Black Drum he landed on Thursday.  Nice one Mike!  The Black Drum bite was good from mid-morning until 2:00 p.m. Fifteen to eighteen Black Drum came over the rails, at least 1/3 were over 24”.  Mike landed one that was 28” using dead shrimp although anglers were catching them on dead and live shrimp.  Snook began to bite after the tide change along with a few large Jacks.  Anglers using sand fleas were having good luck with Sheepshead.
Our second angler of the day is Ryan Kriminger of Orlando.  Ryan fished the north jetty on Saturday when he landed the 38 lb. Tarpon in our photo, using live shrimp.  Ryan reported a consistent Snook bite, oversized and in the slot for anglers using live shrimp.  Ryan landed an 11” Flounder that he returned and a 20” Sea Trout near the Tide Pool.  Ryan released the Tarpon unharmed right after the photo.
Posted by Tony Rose