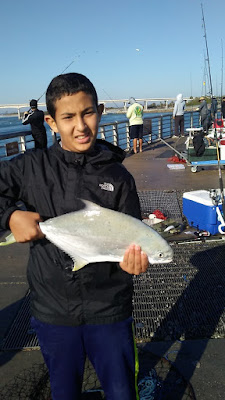 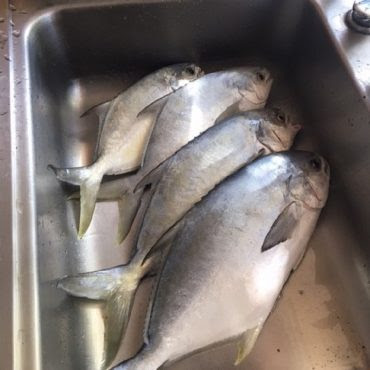 We’ve received several updates from inlet regulars.  Rich Blum of Vero Beach reported the past three days have been pretty slow for him, only one Sheepshead for all of his efforts.  Mike Ricciardi of Vero Beach fished most of the day on Monday and reported a slow day for him as well.  About a dozen Snook came over the rails with two or three slot fish in the bunch.  A couple of C/R Reds, five or six Sheepshead and only three Black Drum.  Spanish Mackerel were plentiful, but small.  Mackerel were running in the 12” – 15” range.  Thanks Rich and Mike!
Our featured angler today is courtesy of Rich Blum and is of Sammy of Morocco.  Sammy landed this real nice 22” Pompano off the north jetty.   Our additional photos are courtesy of Tim Hessing of Stuart.  Tim landed the four nice Pompano.  He reported about 40 poles lined up on the beach but only he and one other angler were landing anything.  He confirmed with the other successful fisherman that they were both using frozen sand fleas on gold hooks, for some reason they wouldn’t touch fresh fleas on silver hooks!  The two large Pomps were females full of roe which he smoked and it was delicious.
Posted by Tony Rose