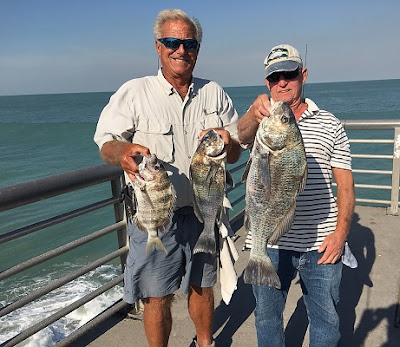 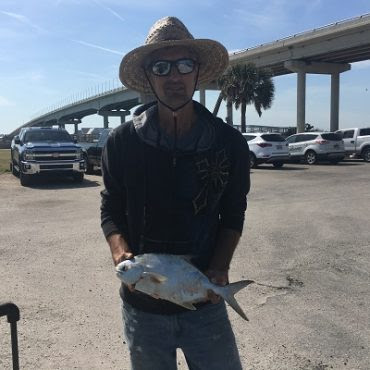 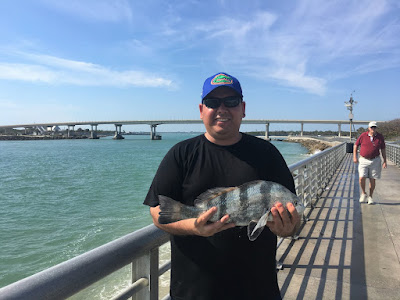 THE BLACK DRUM BITE PICKED UP, SHEEPSHEAD, JACKS AND SNOOK

THE SEBASTIAN INLET STATE PARK HAS BEEN CLOSING THE NORTH JETTY PERIODICALLY FOR PUBLIC SAFETY PURPOSES.  PLEASE CALL 321-984-4852 FOR INFORMATION ON CLOSURES.
We have a wet morning at the inlet and overcast skies ahead of a cold front that is predicted to move through this afternoon.  Winds will shift to the Northwest this afternoon, keeping seas hazardous for small craft.  NOAA has a small craft advisory in effect through 4:00 a.m. Friday morning.
We received an update and our featured photo today from Mike Ricciardi of Vero Beach.  Mike and his neighbor Bob Green fished the north jetty yesterday and reported a good Black Drum bite.  Mike was late, arriving at 1:30 and fished until 4:30.  Although seas were high, westerly winds kept waves from crashing over the jetty and it was a beautiful day overall.  Mike landed a 22” Black Drum on the tide change from incoming to outgoing.  Bob landed a nice 26” Black Drum earlier on the incoming.  Mike also landed a 20” Sheepshead and a 20” C/R Snook on dead shrimp.  After the tide turned a lot of Jacks and Catfish came over the rails.
Our second photo today is of Rich Perlee of Melbourne.  Rich and a friend fished the north jetty last Tuesday and although the bite was slow, Rich took home this good-sized Pompano he landed on dead shrimp.
Our last photo is David Guttmann of Orlando.  David fished the north jetty was able to take home this 18” Black Drum along with a nice 20” Sheepshead.
Posted by Tony Rose