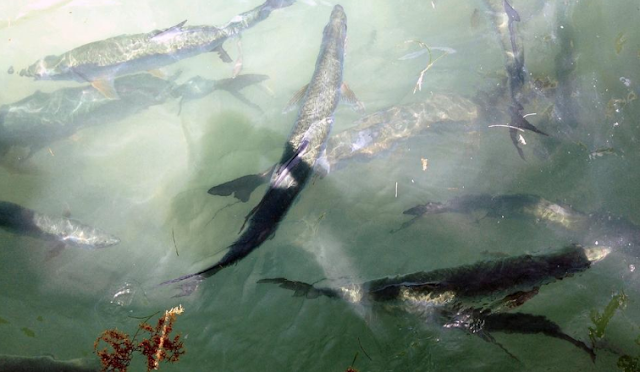 Inshore fishing:
Along the beaches in Martin and St. Lucie Counties there have been lots of tarpon chasing and blasting the schools of glass minnows. They are being caught throwing large swim baits especially in white colors.
There have also been schools of jack crevalle on the hunt on the beaches. They are also being caught on swimbaits as well as on spoons. Near the St. Lucie Inlet, at Sandsprit Park, there has been an excellent snook bite. One angler reported have good luck using a swimbait by Savage Gear.
On the bridges spanning the Indian and St. Lucie Rivers, anglers are getting black drum on shrimp. There have been a few sea trout caught in the river near Herman’s Bay.
At the Boynton Inlet there have been large schools of snook and some tarpon out in front of the north jetty in a deep hole near the sandbar. Tarpon have also been seen rolling in the Intracoastal Waterway near the inlet.
At the Lantana Bridge anglers have caught a few jack crevalle and small ladyfish on yellow jigs and cut mullet.
Lake Okeechobee:
The bluegill and shellcracker bite has been excellent the past few days and should pick up a bit more today and Friday. Using worms and crickets and working just inside the grassline has been producing the best results. Tin House Cove and the Buckhead Ridge areas have been the top spots.
The bass bite is still good and is still been best in the early morning right at sunrise. Anglers working the outside grass lines using swim jigs, spinner baits and chatter baits are having the best luck. As the morning progresses and that bite slows down, switching to flippin’ creature baits in the thick bulrush has kept the action going. Kings Bar, J&S Canal and the Henry Creek areas have been good.