With the winds as strong as they have been the past week, even the St. Lucie and Indian Rivers are a bit churned up.

This has made the fishing a little tougher, but there are still plenty to catch.

There are snook and some nice-sized jack crevalle being caught on the east sides of the St. Lucie and Indian Rivers for anglers working the docks, seawalls and bridges. Live croaker, which the Snook Nook has been having, and threadfins have been working well.

From the bridges there have been black drum and a few scattered pompano caught using shrimp on a jig head.

The pompano bite that had been so red hot on the Sailfish Flats has backed way off with the churned up water.

Anglers at the Lake Worth Pier are reporting that there has been an fantastic jack crevalle bite recently. Squid and Rapala X-rap lures have been working best for catching the hard-fighting fish.

Working the channel edges in the Intracoastal Waterway from Boynton Beach up to the Lake Worth Bridge, anglers are catching a few bluefish and some small jack crevalle using trolled yellow bullet jigs.

At the Lantana Bridge anglers have been catching sand perch, croakers and sheepshead using cut shrimp. There have also been a few ladyfish and bluefish caught around the bridge using cut sardines and one-ounce spoons. 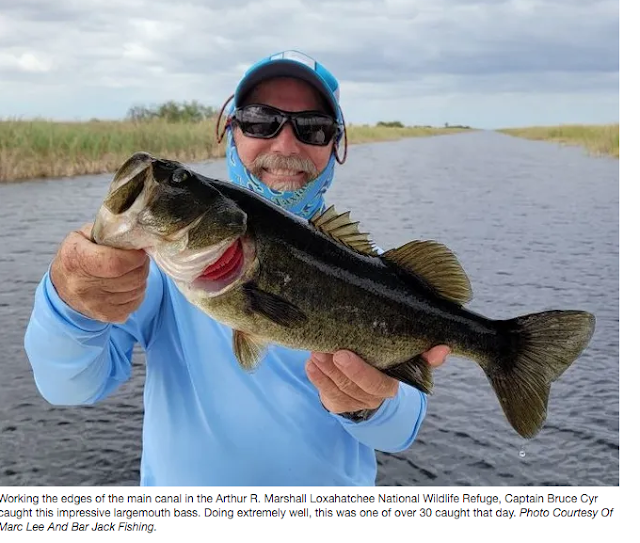 The spec bite is still really good. It's been best using jigs, but in the river minnows are definitely the way to go.

The bass bite has been a little tougher the past week, but it's still good. Anglers fishing the Eagle Bay and Tin House Cove areas have been having the most luck. Working a little deeper into the grassy areas has been most effective with speed worms being best in the early morning and then switching over to flippin' creature style baits.

The fishing in the canals in and around the Loxahatchee National Wildlife Refuge has been excellent recently.

Capt. Bruce Cyr has been catching and releasing dozens of fish in single outings at the refuge with largemouth bass up to five pounds. His go-to lures the past week have been: