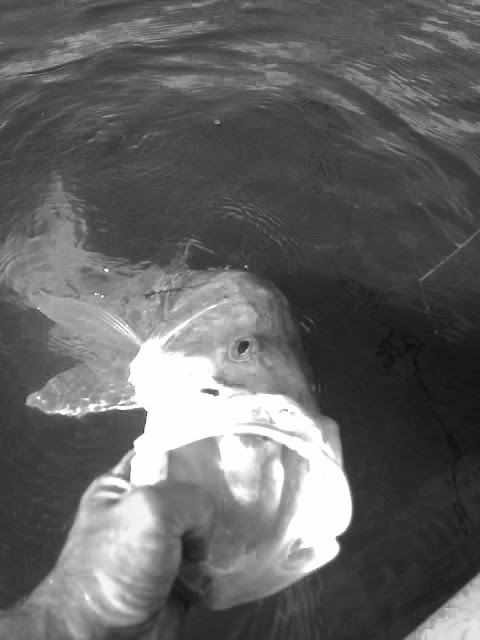 In the St. Lucie and Indian Rivers, there have been good numbers of snook caught recently. Using live mullet or live croakers, which can be found at the Snook Nook, against the seawalls, anglers have been catching plenty of slot-size fish with a few over-slot monsters mixed in.

On the flats, especially in the Indian River up towards Fort Pierce, anglers have been catching quite a few sea trout with a few 'gator-size' fish in the mix. Though shrimp on a jig head is working, anglers using artificials that imitate shrimp or small bait fish are also producing bites. DOA shrimp with a popping cork and twitch baits are excellent options.

At the bridges spanning the St. Lucie and Indian Rivers there's still good action on black drum and sheepshead. Live shrimp on a jig head or live fiddler crabs, which are available at the Snook Nook, are working well.

In addition to snook, there have been some big jack crevalle hanging around the seawalls.

In the Loxahatchee River there has been good action on snook. Anglers using topwater plugs like a Zara Spook or Yo-Zuri Hydro Pencil and working them along the seawall in the early morning and just before sunset are having excellent luck.

There have also been good numbers of jack crevalle, as well as a few bluefish, caught in the Loxahatchee recently.

In the Intracoastal Waterway, in the area around marker 42 (or Tiger Wood's house), they have been getting a few ladyfish the past week.

Along the beaches in Jupiter from the pier north, anglers have been catching pompano. They are being taken on sand fleas and Fishbites in sand flea, shrimp and crab flavor. They are hitting both sand fleas and Fishbites separately, but most anglers are using them in conjunction. Also, if you're getting stripped again and again by the spinner sharks that are still in the area, don't get mad, get moving to another area.

The bass bite has picked back up after a bit of slow down. With the full moon coming up on Sunday a lot of the fish are spawning back up in the beds. Soft plastics are working well for anglers working behind the grasslines from Buckhead Ridge over to the Harney Pond area. There has also been a good bite around isolated stick ups pitching Senkos in black and blue or junebug colors.

Though the crappie bite continues its slowdown, there are still fish being caught in the Kissimmee River. Anglers drifting minnows in eight to 10 feet are having good luck.

The bluegill bite has come up, but it's been mostly guys in airboats and duck boats that can get into the shallow areas (around 2 feet deep) that have been able to get them. Observation Shoal from the Monkey Box over to Uncle Joe's have been hot spots.