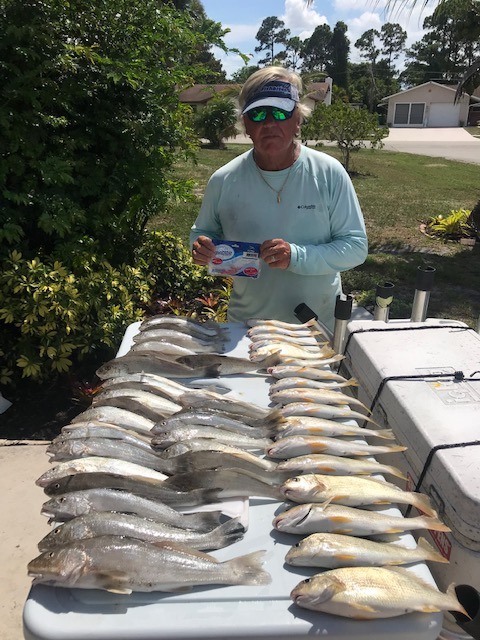 How about 2 days in a row of some great surf fishing action. I met Randy this morning and although the first couple of hours were not as good as yesterday morning the bite turned on later in the morning and we both went home with coolers of whiting and croakers. Bloodworm Fishbites and small pieces of shrimp continue to produce . The whiting bit during the early hours today and the croaker took over after the tide changed around 1030. The snook bite was on fire this morning for the anglers that were able to sabiki some pilchards that were coming through all morning. I watched one fisherman that was south of me get 3 pilchards on a sabiki set up and put them in his bucket with an aerator. He proceeded to hook ,land , and release three nice snook on those three baits. The snook sharpies are live lining their baits in the first trough .The other species that showed today were the tarpon but they stayed out of casting range. There is lots of life on the beach right now so hopefully some of you got out today and bent some rods. The current forecast is for the southwest breeze to continue during the early part of the week and hopefully this great fishing will continue. Good luck this week and catch em up.