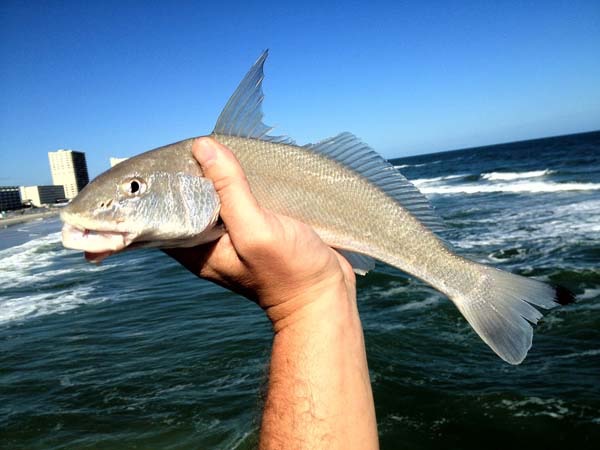 Around the St. Lucie Inlet and the Stuart Causeway, there has been a good snook bite. Though live croakers and pilchards are working best in the early mornings and late afternoons, if there are low light conditions consider throwing a top water plug. Some reallly nice overslots are being caught and released. There are tarpon being caught in the mornings at both the Ft. Pierce and St. Lucie Inlets. The Jensen Causeway has also produced a nice bite for them at night. Use live mullet or pilchards.

Black drum and mangrove snapper are being caught around the bridges and structure along the St. Lucie River by freelining shrimp with a split shot or shrimp on a jig head.

The recent west winds have pushed a lot of the seaweed out and made the surf fishing in Martin and St. Lucie Counties really good. The bite for whiting and croaker has been good. How good? Capt. Paul Sperco reported catching 52 whiting one morning. Shrimp and bloodworm Fishbites have been working best.

At the Jupiter Inlet, there has been some fun catch and release action for snook. Live sardines are working best.

Along the beaches in the Jupiter area, there have been schools of tarpon cruising along the shore. If you're really looking to get hooked up, a fly rod and good guide to drive the boat is a pretty good strategy.

Anglers at the Boynton Inlet and Lantana Bridge are reporting really slow fishing the past few days.

The bass bite has been decent in the early morning and late afternoons using soft plastic worms especially in plum, junebug and black colors and working the outside edge of the grassline. Good spots have been Little Grassy and the pass in the King's Bar area.

During the recent torrential downpours in the mornings and late afternoons, anglers fishing the canals along SR 441 have reported a good largemouth and peacock bass bite, as well as a good snakehead bite while fishing top water plugs quickly along the banks. Lures like Storm Chug Bugs, Devil Horse lures, Heddon Torpedo and baby spooks have been getting explosive surface hits. Lure colors have been varying from black, frog patterns, red head white body, brown/ orange and chartreuse/white.