Lagoon mixing with the saltwater. Fish avoid this water, especially when the temperature changes and creates what I call snot weed, It  is slimy and coats your rigs and bait while fishing. But at least it is disappearing. Last week, fishing was slow but picked up over the weekend.

North jetty: After a slow week, the water began clearing up over the weekend and some of the smaller baitfish and mullet returned along the beach. Sunday and Monday there were nice Spanish mackerel caught on both sides of the jetty, on small crappie jigs and gotcha lures. Blue runners and smaller jack crevalles were biting - on either tide - didn't matter. 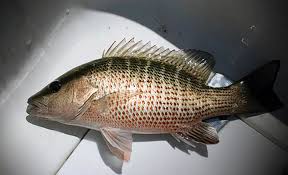 The mangrove snapper have shown up again with some nice 11 to 12-inch fish being caught on cut baits and small greenies cast netted along the jetty. Incoming tide is better for them as they are being caught at the tip along the rocks, and inside between the pilings. I talked to one angler last Friday who was fishing for permit around the tip on the early outgoing tide with live crabs floated out in the rip, and he said he had hooked three but lost two to the rocks and the third to a Goliath grouper. He said the fish were about 10 to 15 pounds. Sheepshead are still around the pilings on the incoming tides with live fiddler crabs.

South Jetty: Dirty water and the weeds and the snot weeds have made fishing tough. It stems from SE winds up to 15 mph we have been seeing all week. Not too much being caught, except for a few black margates, blue runners and the pesky catfish. The water is awful.

T-Dock: Slow here. About the only fish being caught are undersized snappers of different varieties: mutton, lane, mangrove and schoolmaster — all on cut baits. It’s weedy back here, too.

Surf area: The North side the water is a lot cleaner and on the high tides, early, you might find  whiting and croakers biting on cut baits. If you run into mullet or any other baitfish on the beach, snook, redfish, tarpon and large jack crevalles are possible. They like to run the bait schools along the beach this time of year when it isn't too rough. The  South side water is too dirty and weeded up to fish it.