INSHORE:  Snook fishing remains very good inshore right now.  Still trickles of mullet around and the snook are feeding well on them; but are also keying in on smaller baits and shrimp as well.  Basically leaving the bait/lure options pretty much wide open for the snook.  Flair hawks are still producing, but the shrimp jig is coming on strong as well.  A soft plastic shrimp tail fished on a heavy jighead is a deadly choice right now!  Look for the bridges to produce at night on an outgoing tide.  During the day look for the snook to be laid up along seawalls and under boat docks.  Other inshore action should really start to get better with the change in weather.  The Hobe Sound Flats and Munyon Island flats should both really start to come alive in the near future.

SURF/PIER:  The surf fishing really kicked into high gear this week.  The fall/winter species got the memo that they were supposed to show up...and they did!  Bluefish, Spanish Mackerel., jacks, and ladyfish have all been around in good numbers this week. 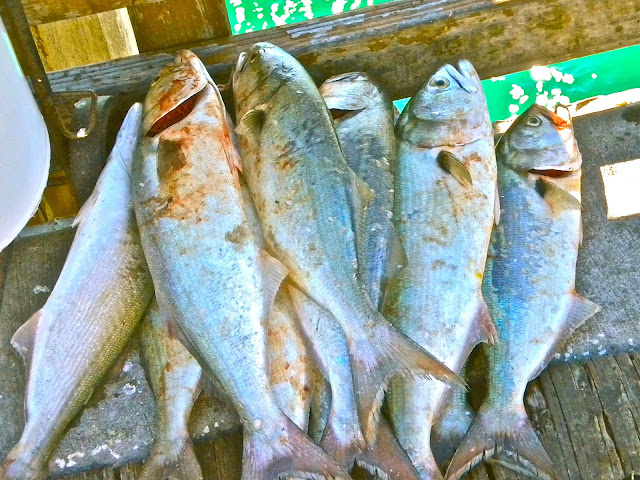 The Juno Beach Pier has been hot, with lots of good action.  All the usual lures (spoons, jigs, gotchas, etc..) are working for the bluefish, as is cut mullet or sardines.  A few pompano are being caught on Goofy Jigs, sand fleas, and clams.  The pompano fishing should improve even more this week with the first cooler weather of the season.  Lots of good stuff going on along the beach...give it a shot if you can!
Posted by Tony Rose