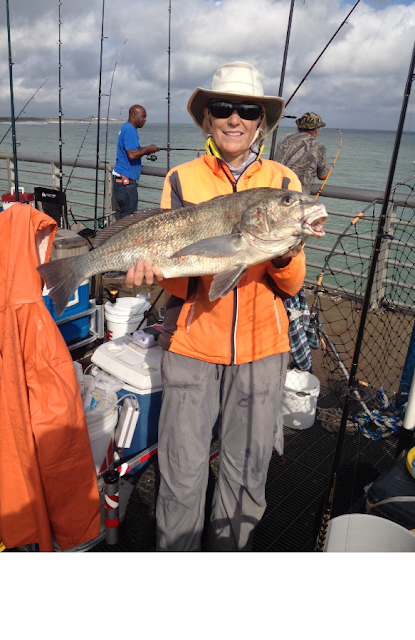 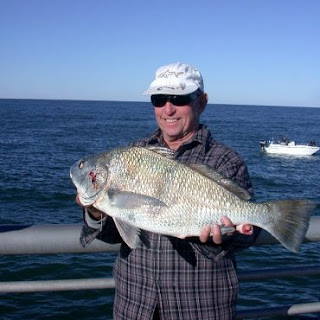 We have a very chilly morning at the inlet. Winds blowing out of the North-northwest at 6 mph and gusting to 15 are making it feel even colder.  Winds are forecasted to calm down this afternoon.  NOAA is calling for small craft to exercise caution through 10:00 a.m. this morning.

Sally Baughman of Jackson Hole, WY is back for some winter fishing and landed this big Black Drum  while she was fishing for Snook. Sally landed this nice fish on shrimp.
Some real nice Black Drum are hitting from the north jetty according to Mike Ricciardi of Vero Beach. Mike fished the north jetty yesterday afternoon and reported quite a few Black Drum had been landed, all over 20”.  Anglers using dead shrimp, sand fleas and clams were having the best luck.  Sheepshead were also hitting on the same baits.  Mike sent in photo two of his neighbor Bob Green who landed one of the larger Black Drum.  Nice catch Bob, thanks Mike!
Park Info: Saturday, December 16th the State Park will have a surf fishing workshop at the SISP Fishing Museum from 1:00 – 3:15 p.m.  Surf fishing class designed to introduce anglers to the basics of surf fishing.  Discussions center on the equipment needed to enjoy a productive surf fishing day at the beach.  Topics include rod and reel selection, standard pompano rig, choosing bait and more.  Bring a pen and paper to take notes.
Posted by Tony Rose