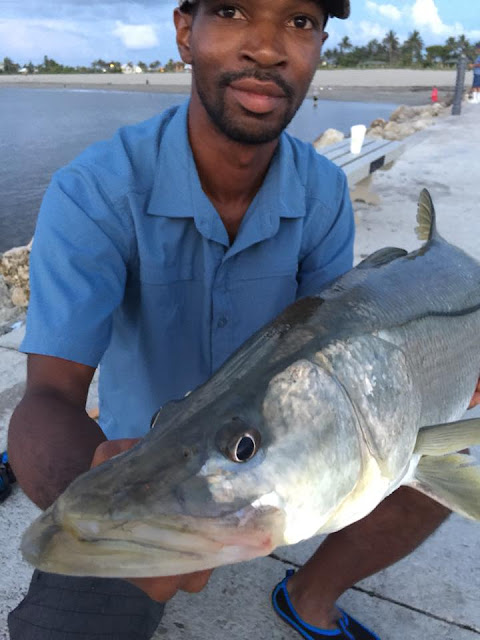 July brings hot weather, chances of afternoon rains and Fourth of July parties. Oh....and lots of great fishing out there, too!  Watch out for afternoon thunderstorms this month.  Mornings on the river will bring action at first light on top water lures for snook or trout along the flats. They will seek deeper water as the sun rises.  It’s a hot, but very productive month around the Treasure Coast.
I will be fishing along the mangroves for snook and redfish with DOA shrimp, CAL jerk baits and top water lures, like the DOA Airhead, where the water will be 2-3 feet deep.  Trout will move to deeper flats in 2-6 feet of water and will most likely hit pigfish, DOA 2 ¾” shrimp or Deadly Combos.  Look for the trout to move to the deeper edges of the flats as the sun warms up the water.  Fish the sand holes on the flats!  You will find the bigger fish sitting in these holes waiting on the tides to bring the food to them.  It has been another banner year for big trout around the area.  Redfish will continue to hold up on the flats.  Read the water as you move across the flats and look for any activity that might be a school of reds.  Gold spoons, soft baits, like DOA shrimp or CAL jerk baits will work best for them. Search along the docks during the day for snook or redfish hanging around there as well.  It’s a fantastic month to be fishing!
Bridges will be producing snapper, drum and sheepshead during July. Live or dead shrimp will be hard for them to resist.  Watch the tides and fish the slower sides of them for best results. Whiting will continue to be in the surf with the occasional bluefish and Spanish mackerel. There will be larger snapper in the river around structure and along channel edges.  Sharks will be patrolling along the beach also.  The glass minnows will be flowing into the river in huge schools.  Watch for these bait schools and fish the edges for your best action.

Areas to fish in the river for July: Bear Point, Queen's Cove and Round Island.  South of Harbor Branch will be a great area to work for trout in the mornings before the sun heats up things. The flats in front of the power plant taper off to 3-5 feet and will be holding trout during the day.  Live pigfish are the favorite food for trout this time of year.  It’s time to set the traps to feed these hungry fish!  Try a DOA TerrorEyz or the DOA PT-7 during the day also for trout.  The west shore down there will be good areas to search out redfish. Channel edges will be yielding snapper on structure.  Tripletail will be around channel markers and pilings to the south towards Jensen Beach.
Posted by Tony Rose