INSHORE-  Snook fishing remains the best bet on the inshore side of things.  With inlet snook fishing still good, a few early season trickles of mullet coming in, and enough rain to open up some spillways...you have a wide variety of snook fishing options ahead!  The spillways have been producing a good number of fish when they are open.  A flair hawk jig or  SpoolTek have both been working good when the spillways are flowing.  The snook have also been stacked up around the bridges as well.  Look for the outgoing tide at night to be the best bet for the snook.  For all around action it's hard to beat a shrimp imitating lure floated through the shadow line.  For bigger snook a flair hawk or swimbait presented right along the bottom is a good bet.  Mixed in with the snook have been a handful of tarpon and a few jacks.  As we start to see more mullet flow through in the coming weeks, expect to see a real boost in inshore activity! 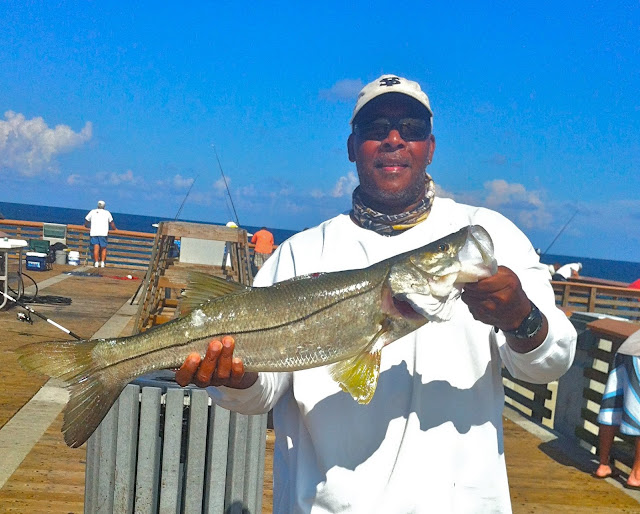 SURF/PIER-  The Juno Beach Pier had a few kingfish around this week, along with a decent number of bonita.  A diamond jig or good casting swimming plug (X-Rap, SP Minnow, or Yo-Zuri Long Cast) are good lure options.  A few Spanish Mackerel around the Pier, but not in the numbers that the past few weeks saw.  While snook fishing has not been red hot at the pier, a decent number are still being caught.  Snook fishing along the beach remains good, especially early in the morning.  Best bet has been small lures in the 3-4" range resembling pilchards.  Good numbers of small baits around, and that is what the snook have been keyed in on.  Up to the nort,h the glass minnow schools are attracting a lot of attention from sharks, tarpon, snook, Spanish Mackerel, and even a early season bluefish or two.  No set spot for the glass minnow schools, just have to go looking for them.  Could be a handful of pompano around this weekend with some east winds in the forecast.
Posted by Tony Rose