Along the beaches in St. Lucie and Martin County there is still an excellent bite for whiting, croaker and a few mangrove snapper. Bloodworm-flavored Fishbites and shrimp worked in the first trough have been producing good results. There have also been plenty of snook and some tarpon cruising the beaches following schools of greenies and glass minnows.

In the St. Lucie and Indian Rivers with the summertime heat things have been a bit slow. That said, in the early morning from first light to around 8:30 anglers have been catching a few redfish, flounder, small snook and small tarpon.

Just north of the Juno Pier there has been some excellent snook action. Livetarget croaker swimbaits have been working extremely well.

At the Jupiter Inlet and along the beaches south there are also good numbers of snook. Though live bait has been good, if you’re able to get out before the sunrise a Red-Tail Hawk fished on the bottom has been fantastic. 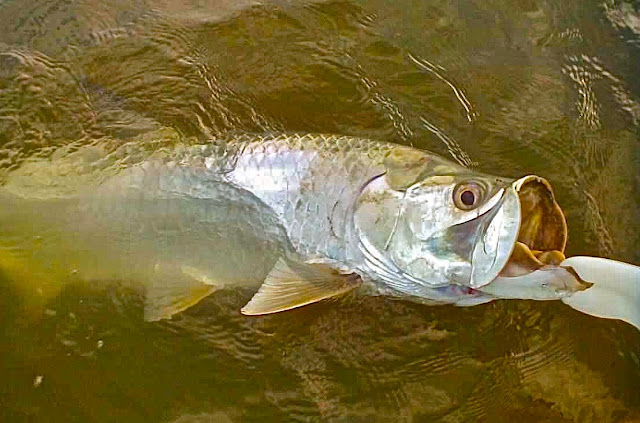 At the Jupiter Inlet there have been tarpon rolling first thing in the morning. Along the jetties at the Lake Worth Inlet, large snook are being caught by bouncing Flare Hawk jigs or Vudu Shrimp off the bottom

Where the sargassum isn’t too thick, anglers at the beach on Singer Island are catching snook and the occasional tarpon working Livetarget Slow-Roll on a weighted hook.

Surf anglers working the beaches just south of the Boynton Inlet have been catching barracuda on tube lures and tarpon using 3.5 inch Yo-Zuri lures that mimic either pilchards or sardines.

At the Boynton Inlet there have been a few mangrove snapper caught as well as snook and tarpon on live baits.

Tarpon up to 100 pounds have been seen rolling in the channel in the Intracoastal Waterway between the Boynton Inlet and the Palm Beach Yacht Center. Anglers at the Lantana Bridge are catching some nice sheepshead on peeled shrimp and clam strips. Sand perch and small mangrove snappper are being caught at the bridge on live and peeled shrimp. Working the shadow lines of the bridge at night has produced a good bite for snook and tarpon.

Out on the lake the past few days the artificial bite for bass has been a bit tough. Live shiners worked along the outside grassline in the early morning has been working best. If going with an artificial though, swim jigs have been effective. Hot spots have been King’s Bar, Tin House Cove and from Buckhead Ridge to Third Point.

There has been excellent action for peacock and largemouth bass along with snakehead for anglers working the canals west of Jog Road and along 441 and the conservation areas. They are mostly biting in the early mornings and late afternoons following thunderstorms and are hitting Livetarget frogs and chatter baits. Bright colors like chartreuse and white and green and white have been best. In the late afternoons, switching to Senkos in colors like rootbeer with goldflake has been working well.