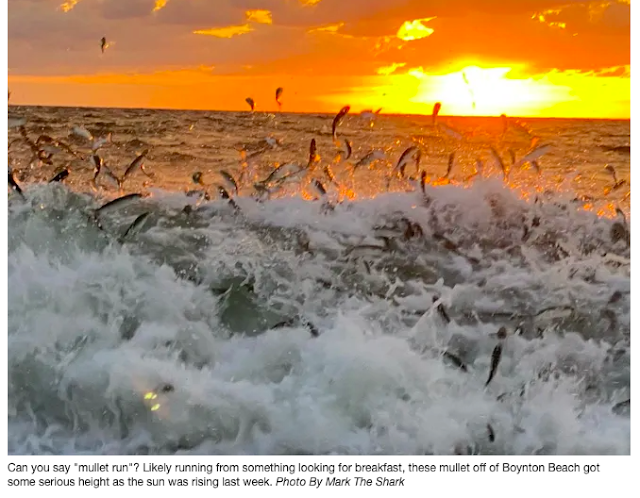 The snook action remains steady as more fish are moving farther back up into the St. Lucie River. Though they are mostly being caught along the docks and seawalls, they are not quite as voracious as they have been. This is likely due to an abundance of food and slowly cooling water temperatures. Shrimp presentations, versus live mullet or pilchards, may start being the call in the near future.

At the Stuart Causeway, and under some docks, there are some slot-size redfish being caught. Shrimp on jig head, cut bait, or live finger mullet on a knocker rig are all working.

Stone crab season is under way and there will be tripletail hanging around the traps, waiting to be caught.

Along the beaches in Martin and St. Lucie Counties, the numbers of pompano, Spanish mackerel and bluefish continue to increase.

Cut shrimp and sand fleas are working for the croaker, cut or live mullet for the bluefish and throwing a one and a half to three-ounce spoon, like a Gator or Crocodile, in the early mornings is producing snook, ladyfish and jack crevalle.

At the Boynton Inlet, snook and mangrove snapper have been hitting live baits, including mullet and pilchards, around both jetties.

A few slot-size redfish were taken on cut mullet at the southern end of Ocean Inlet Park.

The Intracoastal Waterway has been packed with mullet, pilchards and greenies the past week.

Tearing into those schools have been snook, tarpon, redfish, ladyfish, bluefish, jack crevalle, mangrove snapper and a few flounder.

Fishing around structures, docks, channel edges and around the spoil islands has been producing good action.

A good sheepshead bite was reported off the Snook Island pier and around both the Lake Worth and Lantana Bridges using clams, crabs and live shrimp fished alongside the pilings.

The bass bite has been OK the past few days.

Fishing in Cody's Cove and using live shiners for bait, Capt. Larry Wright had his clients into 20 fish early Wednesday. He commented that they had 60 bites, but that the bass seem more intent on killing the shiners than actually eating them. He said the bite has been relatively consistent and that he had his clients into 50 fish with a couple in the seven-pound range on Sunday.

Though working the outside grassline is still the main area to target, the fish are starting move back into the grass more and more.

While swim jigs in pearl white can work early for bass, anything artificial has been tough. Capt. Larry joked that you could "flip for miles without catching anything."

The spec bite has remained steady, but after the strong cool front predicted to move through this weekend there could be a nice uptick.