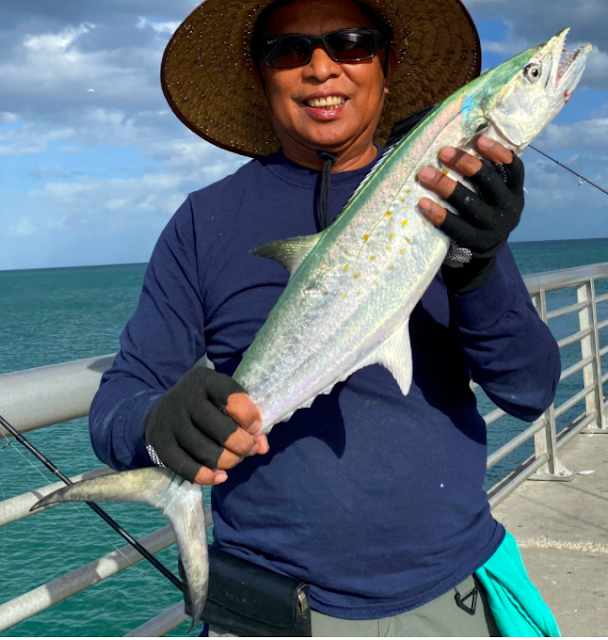 Jun Policarpio caught this 24”-inch, 3 -pound spanish mackerel  using live greenies. He caught  six  mackerel that day, with two being 24 inches in length.
Our fabulous fishing guide, “Snookman” Wayne Landry, reports that fishing was not happening at the North Jetty, thanks to the wicked cool front that rolled in last weekend and brought torrential rains, high winds, HUGE surf, and very dirty water. Only a brave few dared to face the waves crashing over the jetty.

“Prior to the arrival of the front, plenty of mullet were coming down the beach and around the jetty and into the inlet,” Wayne says. “But there were no predators with them. They were just lazing around.”

However, a few fingerlings lured some nice Spanish mackerel into the morning tides on the ocean side of the jetty, Wayne adds.

“Prior to the deteriorating conditions, most of the fish were being caught on small pilchards that were everywhere around the jetty, and most of the Spanish were averaging three to four pounds. Quite a few I saw caught were pushing the five-pound range,” he says. “I haven't seen fish of this size for some time. Also, I saw a few nice pompano caught last week on dead shrimp before the weather moved in and the water was pretty clean.”

Some were catching mangrove snapper — some being keepers — along with a couple of nice cubera snappers caught on live and cut baits.

“Large redfish were being caught by the boaters out front, but very few, not like it was a couple weeks ago,” Wayne says. “The snook seem to be absent from class again with no reports of any being caught. The water temp as of this morning is a cool 73 degrees. I'm hoping that as the roughed-up seas clean up that the pompano, black drum and sheepshead might show up.”

Wayne says anglers are catching small snook, redfish and mangrove snapper on small, live bait at the South Jetty, while the action at the T-dock area is limited to a few small snappers and an occasional jack crevalle or catfish.

Surf area is a total washout! Before the weather and huge surf some Snook were still being caught if you knew where to fish a good trough and the water was clean. Also, I heard of some Whiting being caught as well.

“That's all I have,” Wayne says. “I wished I had better news, but the weather always plays a hand in our fishing. It’s supposed to be a nice week but still a little windy. Go out and find a calm spot, throw out a line, see what comes up, and enjoy the mild temps. Tight lines everyone!”