At the St. Lucie Inlet, the docks and seawalls along the St. Lucie River and the causeways spanning the river, the name of the game is snook.

The bite is getting better and better with the causeways being especially good the past few days.

There have been plenty of slot and overslot fish caught.

Live baits, especially croakers are working better than anything else.

On Wednesday, a kayak angler, armed with six croakers, fished in the morning. Using only three of the six croakers he'd brought with him, he caught and released a 41" and 43" snook. He decided that was a great morning of fishing and all called it a day.

In addition to having a good snook bite, the Jensen Causeway has had some decent action on Spanish mackerel and even a few pompano. Doc's Goofy Jigs and Gulfstream Flash Minnow jigs have been working well.

Along the beaches in Martin and St. Lucie counties the bite for whiting and croaker has been good in the first trough. Pieces of shrimp tipped with pink shrimp Fishbites have been working well.

With the snook starting  to make their way towards the Lake Worth and Boynton Inlets, Capt. Pat Smith had his clients working the some of the nearby docks.

Using threadfin herring and sand perch, he had his clients into 30 snook on Monday with 15 of them being big, overslots. The fish were all caught and quickly released.

Capt. Pat said there were also some tarpon around, but for whatever reason they were just not wanting to hit on anything.

Croaker and sand perch have been hitting peeled shrimp around the Lantana Bridge.

Using threadfin herring and sand perch, he had his clients into 30 snook on Monday with 15 of them being big, overslots. The fish were all caught and quickly released.

Fishing the area just south of Indian Prairie towards Horse Island, Capt. Larry Wright had his clients into 45 largemouth bass Monday morning. Using live shiners and working the outside grassline, he said that, though there were no giants in the mix, they managed 15 that were at least five pounds or better.

If using an artificial bait, flippin' a Reaction Innovations Skinny Dipper in white trash color along the outside grassline has been producing some good results.

In the Harney Pond Canal, the bluegill bite is still solid. Anglers working the banks and using live crickets are faring best.

Though the shellcracker bite has not been quite has hot, that should change next week as the May 16 full moon approaches.

Anglers are still catching a few specs in the Kissimmee River. Working the area under the bridge from 9 a.m. to around 1 p.m. has been the best location and time. Grass shrimp, minnows and jigs are all working. 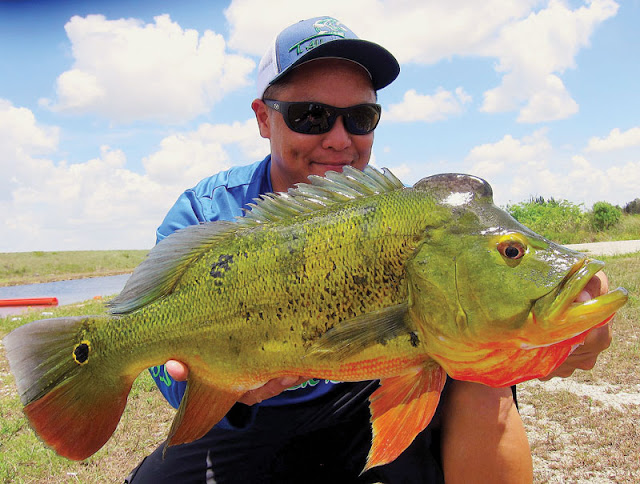 Fishing for peacock bass has been picking up in the lake for anglers using live shad or shiners on eighth- to quarter-ounce jig heads around the bridges, docks, deep weed edges and canal junctions. Early mornings and late afternoons have been best.