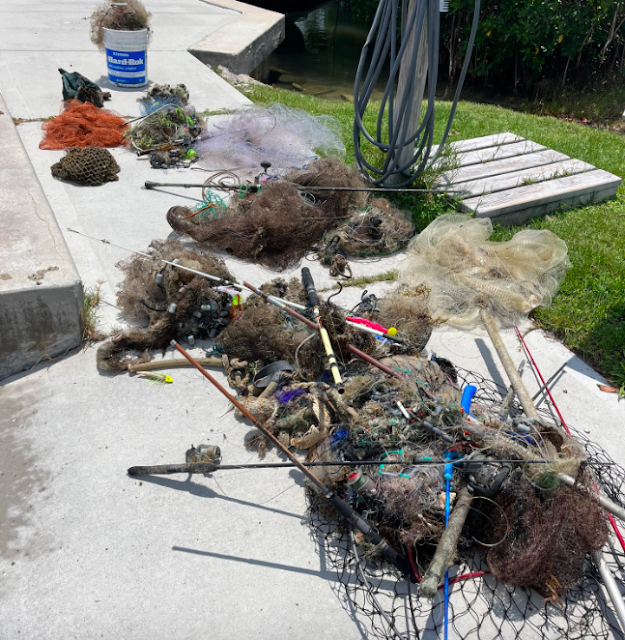 “Good morning, all my fishing fanatics. First, I would like to thank all the law enforcement dive teams for what cleaning up the "underwater" area of the north jetty last Wednesday. Job well done! Also, I would like to thank our SISP (Sebastian Inlet State Park) team, including our park managers. I was a part their team who cleaned up the ‘topside’ of the jetty and rock area over the wall (from the catwalk to the tip of the jetty). We picked up three five-gallon buckets of junk and litter in that area, most of it was from the rock shoreline over the wall, and the last 20 feet or so of the jetty. Job well done, Ken, Alex, Tess, Terese, D, and a couple of our other volunteers on site. THANK YOU!

Now, for what you all are waiting for: Last week, the fishing picked up quite a bit, mostly due to the calmer weather and cleaner water and the water temperatures being pretty much where they should be for this time of year, finally.

North jetty: Early last week there was a fairly good snook bite in the early morning at the end of high tide and first part of the outgoing tide on live shrimp and mojarras. As always, most were too big to keep but several keepers were taken. I saw were some small mangrove snappers being caught on live shrimp and cut bait, but most were under the minimum 10 inches. Some were keepers. Lookdowns were being caught on small crappie jigs around the tip on the incoming tides, along with just a few Spanish mackerel on gotcha lures. While the jetty was closed for the two days and I was out there, I saw a lot of promising action around the jetty. In the clear water, I saw a lot of baitfish, pilchards and greenies, along with the small needlefish that usually show up this time of year when the water warms up. Plenty of big barracuda were  cruising around, huge jack crevalles were chasing the mullet schools, large cubera snappers were swimming around the rocks at the base of the jetty, as well as sheepshead. I also saw quite a few schools of baitfish outside of the jetty moving around, and some large tarpon rolling around headed north up the beach. They looked to be in the 80 to 100-pound range, and there were quite a few of them in the schools.

South jetty:  With the water calmed and cleaned up last week, the bite over here has picked up quite a bit too! When I was down all last week, I saw quite a few nice snook caught in the slot and over slot from the rock wall on the incoming tide. The bait of choice was the mojarra, but a few were caught on live shrimp as well. On the tip of the jetty on both tides there were black margates, blue runners and whiting being caught, along with the ever-pesky catfish. Later in the week, the pompano bite went off fairly good on the southeast corner surf area. Thursday when I was over there, I saw fish flying over the rail almost on every cast! Most of the pompanos were about 13 to 14 inches to the fork - nice fish! They were caught on the small "goofy" jigs, (pink/white, chartreuse/white).

T-Dock area: Back here, the bite has gotten better, with mostly the snapper family being caught. I saw plenty of mangroves taken; most were too small, but a few fell onto the 10-inch minimum keeper range. Also, I saw a few schoolmaster snapper and lane snappers being caught in the mix. Schoolmasters must be 10 inches, lane snapper,  8 inches. I also saw a couple small goliath grouper caught fishing for snook. Speaking of snook, the bite back here has been a hit-or-miss deal on live mojarras.

Surf area (both sides): Due to the winds picking back up this past weekend and thru the rest of the week, if you find clean water you can usually find a lot of whiting and some pompano. Cut shrimp and fish bites and sand fleas will be your best bait. But look for clean water.