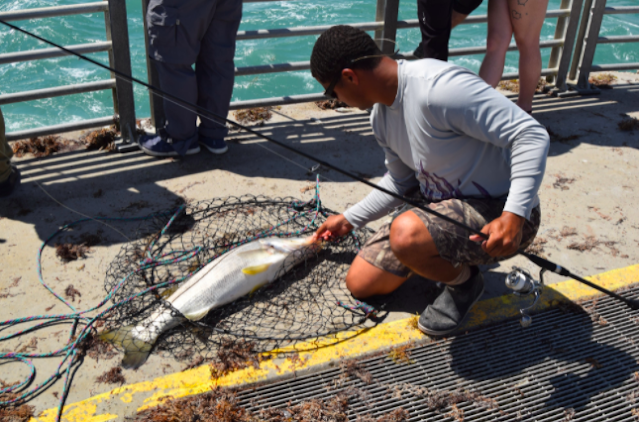 When winds are down, look for snook, jacks, blues, and a few Spanish mackerel

Our trusty fishing guide, “Snookman” Wayne Landry tells us what’s been biting at Sebastian Inlet and offers insight on the illegality of “snagging” certain species. Let’s get right into it:

“Well, here we go with another week of winds to dictate our fishing! The good thing is that the water has warmed up to 76 degrees — closer to where it should be — but the water is dirtied with seaweed to make it interesting.

Something has been brought to my attention about some of the folks fishing for snook at the tip of the north jetty on the outgoing tides. Snook gather in large schools on that tide, and for whatever reason they do NOT want to bite at all. It’s been like this for a while now. A few guys told me that they have witnessed angler purposely ‘snagging’ snook out of the schools with small sharp ‘goofy jigs’, or flutter jigs, just so they can catch one. That is illegal and is in the Florida Fish and Wildlife Conservation Commission (FWC) rules on allowable gear to catch them: snagging is prohibited.  I personally have alerted the FWC of this of this situation, so please, folks, respect our fisheries and the rules set in harvesting them.

North jetty: Over here early last week there was a good snook bite before the winds picked up. There were nice slot fish, and most too big were being caught on the outgoing tide at the tip on live mojarras, and also some were being caught ‘walking the dog’ as well.  Other species I saw over the weekend as the winds laid down a bit, were bluefish, jack crevalles and a few Spanish mackerel on cut baits and silver spoons all on the outgoing tide as well. Small mangrove snapper are starting to show up, but most are too small to keep — but I did see two keepers. Also, on Sunday the water on the North side / ocean side of the jetty was pretty clean and I witnessed a couple nice pompano taken on small jigs. Also, there are large jack crevalles in the 20 to 30-pound range chasing schools of mullet running along the inlet. They will hit just about anything you toss at them, as they aren't picky when they are in feed mode. I also saw some nice sized bonitos caught Sunday on gotcha lures.

South jetty: Over here, the water has been very dirty and weeded up for the most part, but fish are still there with most species being caught at the tip on outgoing tide: small jacks, blue runners, margates, sea bream and spot tail pinfish. Some snook are being caught on the incoming tide on live mojarras along the shoreline on both tides. You just have to find where they are staging and work through the weeds to get them. Also, I talked with a couple of my contacts and they have seen a few nice sea trout caught in the surf ‘pocket’ area on the south side of the jetty on small jigs and mojarras, when the water has calmed and cleaned a bit.

T-Dock area: Dirtied water, seaweed and the lack of baitfish has slowed fishing here. Pesky puffers and small mangroves are possible on cut baits. Bluefish and Spanish mackerel might be possible by tossing silver spoons to the channel area. There are also large jack crevalles running the mullet schools into the inlet.

Surf and offshore have still been a blowout all last week, with small craft advisories keeping most boaters off the water — and the surf was only good for surfing.

Get your gear, pack a lunch and get out and enjoy the nice weather, and make sure to take the sunscreen.