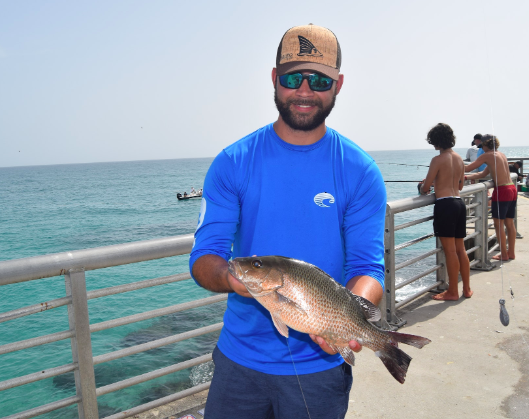 And now for our weekly fishing report from “Snookman” Wayne Landry:

“Good morning all you Sebastian Inlet fishing fanatics! I hope everyone had a great weekend! As I predicted, the water at the inlet had warmed up quite a bit, and more baitfish returned. Along with them, the hungry predators as well. Late last, week there was bait everywhere: greenies and pilchards, that is - no glass minnows yet; they are still way up north. The water had cleaned up nicely as well, and fishing improved. With all that, here is the scoop...

North jetty: Fishing here picked up pretty good between last Wednesday thru the weekend, with quite a few nice mangrove snapper caught on both tides. Incoming, they were all along the jetty on both sides of the jetty and between the pilings, and at the tip of the jetty. Most fish were between 11 and 14 inches, nice fish! Small live mojarras and cut baits were the trick for them. Also, I saw quite a few cubera snapper all around the tip of the jetty on both tides, but nobody could get them to bite as the water was gin clear, and they tend to be pretty gun shy when it is that way. The majority of the fish looked to be anywhere from five to 20 pounds — nice fish and plentiful. Also, at the tip on both tides you could see a lot of Atlantic spadefish just sitting out there in the tide hanging out, but they didn't want to bite due to the clear water. They can be fished with live or cut shrimp. Another bite I heard about but didn't see, was the very early morning and late evening snook and redfish bite. Fish were being caught on live mojarras - if you could find some, as they have been hard to find in the cooler water. Also, I saw sheepshead swimming around in the clear water around the pilings. They can be caught on live fiddler crabs and cut shrimp.

Catwalks, both sides: The south catwalk has been slow due to the weed still present and the water being still somewhat dirtied up. The north catwalk has been a lot better as the water is deeper and cleaner. Mangrove snappers and black margates have been the majority of the fish being caught on mostly cut bait fished around the fenders and pilings on the outgoing tide.

Surf both sides: The south side has been slow due to the dirtied water and the seaweed drifting that way. If it cleans up, which appeared to be the case on Sunday, look for the possibility of  pompano and mangrove snappers along the rock line that runs the surf along the coast. Pomps can be caught on live sandfleas and cut shrimp, and fish bites. The snapper will bite small live baits and cut baits. Big nurse sharks have been seen swimming around the area over there and are a possibility to catch, and they just might eat what you are fishing! The water has been much cleaner on the north side and there are schools of baitfish swimming the surf to help keep it kind active. Whiting and croakers are possible on cut baits. Snook, redfish, tarpon and Spanish mackerel are possible around the bait schools. Fish them with live baits, spoons or jigs and swim baits for a possible bite. From what I have heard, there are large schools of glass minnows around the Satellite Beach area, but they just haven't come down here yet.