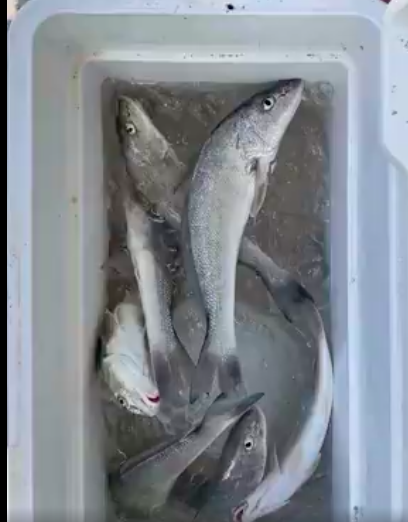 How about a Saturday post about catching enough tasty whiting on the beach to take home and have a great dinner !! I didn’t fill the cooler this morning but caught some nice whiting and had fun catching and releasing a bunch of palometa and croaker . Now you notice I haven’t mentioned slime weed or sargassum yet . The slime weed was non existent and the sargassum was annoying . At least you could shake the scattered weeds off of your line and keep fishing . Under normal fishing for this time of year I would be saying the fishing was slow but based on the last 30 to 45 days any day you can put some in the cooler and release a bunch it was a good day . The whiting were virtually at your feet and 5 to 10 yards from the edge of the sand was the catch zone . Bloodworm Fishbites tipped with a small piece of shrimp was the ticket and a 2 ounce pyramid was needed even in that first trough as the current was screaming to the north. I fished at Stuart Beach and walked up and down the beach pitching my bait . The trough is pretty defined there and whether it was a small croaker, palometa, or whiting they were spread out up and down the beach . I did not see any bait or snook cruising in the trough but the water had some nice color . A 3500 Penn Spinfisher on a 7 foot Bass Pro Gold Cup Inshore rod was the setup for today . These smaller fish are a lot of fun on this light gear .I switched from Bloodworm Fishbites to Pink Shrimp for a short period of time and my bites backed off . Once I put the Bloodworm back on the activity picked right back up . The Bloodworm Fishbites are ”the” bait for the whiting and croaker.