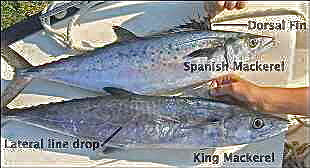 It's another pretty morning at the inlet, but clouds are looming in the east and we could see rain sometime today. Winds are blowing out of the Southeast at 8 mph, gusting to 11 and there is a light chop on the water.

Early this morning Snook were hitting live shrimp, a few slot sized fish were landed. We've also been seeing Spanish Mackerel, Blues and Jacks. Mangrove Snapper have been running, but they've been small.

Our first photo features inlet regular Diane Buyce of Melbourne. Diane landed two nice Spanish Mackerel  using a Gotcha lure.
Do you have a difficult time telling the Spanish Mackerel from Kingfish? Many folks do. Photo three is courtesy of SISP Ranger Ed Perry who found this photo taken by David Thornton on Michael Wilson's blog site http://forshorefishing.blogs.theledger.com. The photo shows the difference in the dorsal fins and the lateral line drop on the King Mackerel.