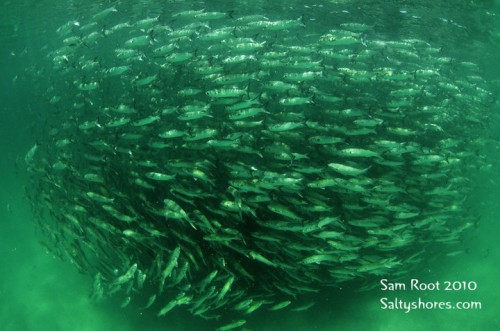 INSHORE:  The mullet run has begun to find its way inshore.  The snook, tarpon, jacks, and even a few redfish are not far behind the schools of finger mullet flowing in with the tide.  A live finger mullet fished on the edge of the school is the best bet right now, but mullet like lures will work well for predators gorging themselves on easy meals right now.  Snook fishing remains good aside from the mullet run.  The bridges continue to produce some snook boîtes, mainly on outgoing tide.  Other inshore action has been spotty.  best bet right now is to look for the schools of mullet...the fish won't be far behind.

SURF/PIER:  Nothing like the mullet run for some all out great fishing (and if you can't get bites...at least your in for a good show!).  The snook, tarpon, jacks, sharks, bluefish, and host of others are following the mullet down the beach right now...gorging themselves on easy meals.  A live mullet fished on the outside edge of the school or under the school is a good way to get bit when dealing with a million mullet.  A large noisy topwater or large silver spoon is also a good lure choice when fishing the mullet run.  Try not to get stuck down in one particular spot when fishing the mullet run, but instead go light and be prepared to follow the mullet down the beach.  Lots of good stuff going on...get out and go catch em!
Posted by Tony Rose