Inshore Fishing:
Off of the Jensen and Roosevelt causeways there is still excellent action for black drum. Shrimp on a jighead is the way to go.
Up by the St. Lucie Power Plant the sea trout bite is also still holding and there are also some redfish being caught in the area.
In the Indian and St. Lucie Rivers, there has been some good snook action. The key is finding the mullet schools and using top-water lures.
Along the beaches in Jupiter they have been catching a little bit of everything including bluefish, Spanish mackerel, ladyfish, a few pompano and a few redfish. Spoons and lures that resemble shad are working well. Like many things, timing is the key. That first hour after sunrise is when the fish are biting. One shop owner, who caught 13 fish in that golden hour two weeks ago, had five in under an hour on Tuesday. He had three jack crevalle and two bluefish using an Acme Kastmaster spoon.
In the Loxahatchee River, there has been a good bite on jack crevalle, a few bluefish and snook. Working the docks and seawalls using D.O.A. Shrimp lures or live shrimp has been producing good results. 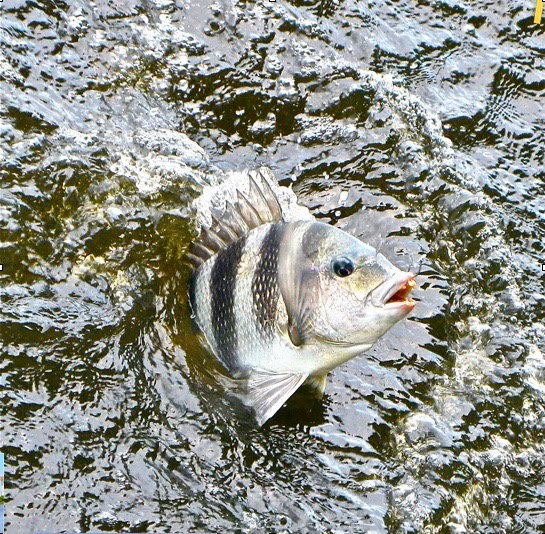 Anglers at the Boynton Inlet have been catching sheepshead up to six pounds, small mangrove snapper and sand perch along the seawalls and pilings on the north jetty. The sheepshead are hitting small crabs and the snapper and sand perch are being caught on shrimp.
There have been large schools of sardines and mullet holding in the Intracoastal Waterway right at the mouth of the Boynton Inlet and along the south seawall and adjoining flats.
At the Lantana Bridge, sheepshead, jack crevalle, ladyfish, black drum, small mangrove snapper and sand perch are being caught on various jigs, lures, live shrimp, small crabs and cut mullet.
Lake Okeechobee:
The bass bite has been excellent the past week in the early mornings working the outside grass lines. Best bets are moving baits including Skinny Dippers, Speed Worms and swim jigs.
After the morning bite starts to back off switching to flippin’ and using beaver-style baits or switching to live shiners will keep the action going. The speck bite is starting to pick up some. Jigging around Little Grassy and King’s Bar has been productive. There have also been some taken by anglers using minnows in the deeper areas of the Kissimmee River. There has been good action for bluegill and Mayan cichlids in the Indian Prairie and rim canals. Worms and crickets are the go-to baits.