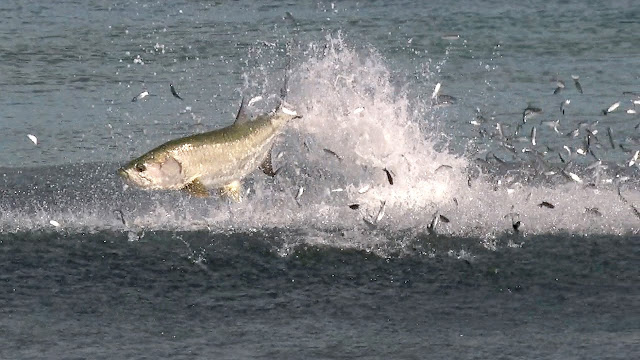 INSHORE-  Mullet run action has the snook chewing very good inshore right now.  The best action has been at night.   Look for the snook to be stacked up at easy ambush points (Bridges, seawalls, sandbars), using the tide to wash schools of mullet to them.  Fishing mullet schools is a bit like playing the lottery, so we like to move away from big schools and fish spots these ambush spots.  The snook will be more likely to be less selective in these situations.  Flair hawk jigs, mullet like swim baits, and swimming plugs are all good options right now for the snook.  Mixed in should be some tarpon and jacks as well taking advantage of the large amounts of mullet.
SURF/PIER-  The mullet run is in full effect right now.  Tarpon, sharks, and bluefish are the main predators around the mullet schools right now.  Look for the best action to be early morning and again late in the afternoon.  The mullet tend to get bunched up best this time of day by the predators.  Later in the day they tend to spread out in a longer line and it's harder to fid consistent action.  When fishing live baits try fishing the outside edges of the school. or go underneath them.  A topwater (Yo-Zuri Hydro Pencil) or swimming plug (Rapala X-Rap)  will be a good lure option.  Again, try to stand out by fishing the outside edge of the schools.  Pompano reports slowed a bit this week, but a few are still around.  For the most part the pompano have been on the smaller side; with a handful of keepers mixed in.
Posted by Tony Rose