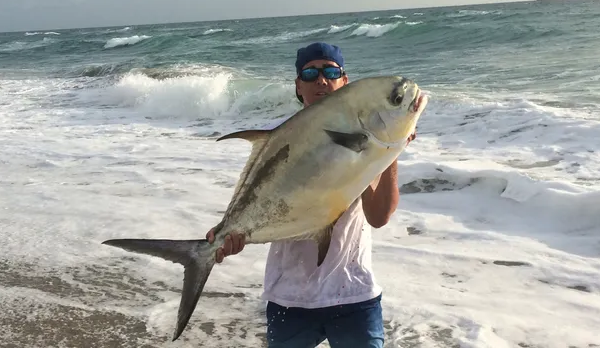 Fishing in the St. Lucie River has been "on fire" with the mullet run the past week.

The snook bite in the river has been best in the early mornings and late afternoons. They seem to want only mullet right now. Finger up to eight inch mullet are working best. The flats up by the St. Lucie Power Plant still have an excellent trout bite. They are being caught using live shrimp on a popping cork.

Also in that area there has been some quality tarpon action. One angler fishing from a canoe caught a 150 pound monster while bump trolling a mullet. It was quite a ride.

Along the beaches in St. Lucie County there is still a good pompano bite. Like the previous weeks, they are out a ways in the second trough. Sandfleas, Sandflea-flavored Fishbites and Sandflea-flavored Gulp! Crabs are working well.

With sharks driving a lot of mullet up against the beach, there have been good numbers of snook taking advantage of the buffet.

Along the beaches in Jupiter there have been plenty of tarpon, snook and jack crevalle chasing mullet schools.

In the Loxahatchee River the snook bite has been good. Use a live mullet or rubber shad and bounce it along the bottom underneath the schools of mullet moving through. As good as the snook fishing around the West Palm Beach area was last week, it has gotten even better. Plenty of slots, and even a few big overslot were reported this week from the bridges in West Palm at night. Fishing with either a live or cut mullet on the bottom is working fantastic, with ladyfish being the next best thing. For artificial, throwing big swimbaits and chartreuse or white Flarehawk jigs has been working well.

From the Lake Worth Inlet there have been lots of big mangrove snapper and blue runners cruising around the rocks. Live or cut mullet have been the go to choice for the mangroves.

At the Boynton Inlet and along the nearby beaches, anglers are catching pompano on one-ounce Goofy Jigs. Also on the beaches and at the inlet, Spanish mackerel and bluefish are hitting spoons and blue/silver Yozuri Hydro Pencil lures in the early mornings.

Snook, tarpon and an occasional slot redfish have been hitting live pinfish and live finger mullet off both jetties at the Boynton Inlet.

Ladyfish, bluefish and jack crevalle are being caught on trolled three-quarter- to one-ounce Lima Bean bucktail jigs in either yellow or white around the flats north and west of the Boynton Inlet in the Intracoastal Waterway.

A few lucky anglers working the Lantana Bridge have been getting flounder up to five pounds using live shrimp and fishing alongside the pilings under the bridge.

Similar to last week, the bass bite has been best in the early morning. Using either live shiners or artificial baits, including jigs and Senko worms, anglers working the outside grassline and just inside the outside are doing well. For the worms, the best colors have been blue/black or white. After that first hour, switching to flippin' will keep the action going.

There is also still an early-season spec bite happening. It's been good in the Kissimmee River using minnows and jigs.

There is a decent bluegill bite at the Lake Okeechobee Park pier. Worms, crickets and beetle spins are all working.