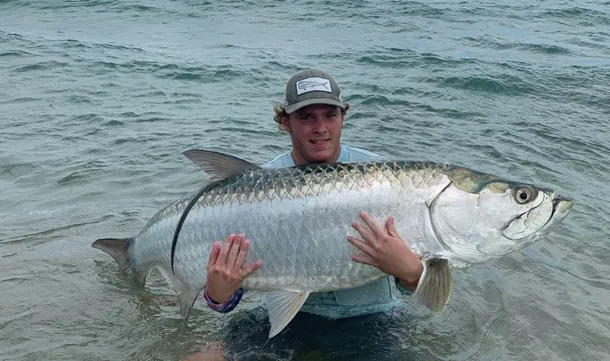 Along the beaches in St. Lucie and Martin Counties the fishing is still fantastic.

Surf fisherman are still catching pompano and lots of permit. Again bring the big 11 foot rods as they are both being taken in the second trough on live sandfleas, Sandflea-flavored Fishbites and frozen clams.

With the mullet run still in full force there are plenty of snook, tarpon and jack crevalle also being caught on the beaches.

At the St. Lucie and Fort Pierce Inlets, there have been some big redfish being caught.

They are also still catching trout north of powerlines on the flats near Herman's Bay.

Mullet run action has continued throughout West Palm Beach this week with snook, tarpon, jack crevalle, sharks, blue runners, and even a few bluefish all following the bait schools. Although the feeding action was not as intense as the previous week in most places, plenty of bait is still being pushed around with fish on them. Look for the Lake Worth Inlet, Blue Heron Bridge and the Intracoastal Waterway to have schools of mullet with some fish on them right now. Flarehawk jigs, swimbaits, cut or live mullet, Rapala X-Raps and large poppers have all been working well.

Best action in the Lake Worth Inlet has been reported around the high tide during the day, while the bridges have been best in the late hours of the night when the mullet are coming through. Look for active mullet pods being worked by fish and try getting your bait or lure underneath the school.

With large amount of bait moving through, the surf anglers are having a blast. They're catching snook, tarpon, bluefish, Spanish mackerel, jack crevalle and blacktip sharks on a combination of live bait, fresh-cut bait and various lures, spoons and top water plugs. Look for bait schools getting chased down the beach early in the morning and again about an hour before sunset.

Around the Boynton Inlet and all through the Intracoastal Waterway, there has been some great action reported.

Flounder and redfish are being caught on live finger mullet off the south walls of the inlet during the slack tides.

Redfish are also being caught around the docks on the west side of the ICW on both live mullet fished on half-ounce jig heads and on gold spoons.

Snook, tarpon, Spanish mackerel and jack crevalle can be caught around the bridges, along the flats and the docks from Lake Worth Bridge down to the Ocean Avenue Bridge using live mullet, fresh-cut mullet, yellow jigs or Gotcha lures.

On Monday, one charter captain had his clients into 43 bass in the morning. The bass fishing has been good. Working the outside line and just inside the outside of the Kissimmee grass in the early morning with swim baits and spinner baits has been working well. After that switching to flippin' a either black/blue or all black Senko worm has kept the action going. Live shiners are working all day.